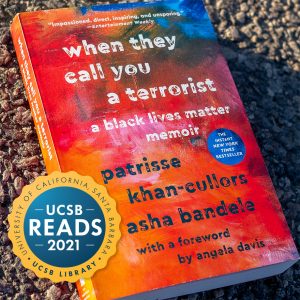 On the fourth edition of “UCSB Reads 2021” on KCSB-FM (Thursday, March 4th), we welcome Whitney Ater, Financial Analyst in the Phelps Administrative Support Center and a Committee Chairperson for the UCSB Professional Women’s Association (PWA). Whitney is reading When They Call You a Terrorist: A Black Lives Matter Memoir, Chapter 4: “Magnitude and Bond.”

A quick link to access on-demand streaming of “UCSB Reads 2021” can be found HERE. This link always includes the two most recents editions of this weekly radio show.

When They Call You a Terrorist, by Patrisse Cullors and asha bandele, is a personal account of this contemporary movement for racial justice and Black lives, which formed after the unpunished killing of young Trayvon Martin in Florida in 2013, and gained new prominence last year after the police slaying of George Floyd in Minnesota.

Feel free to relay any questions about this special radio program (or our time-shifting service) to KCSB by emailing advisor@kcsb.org.