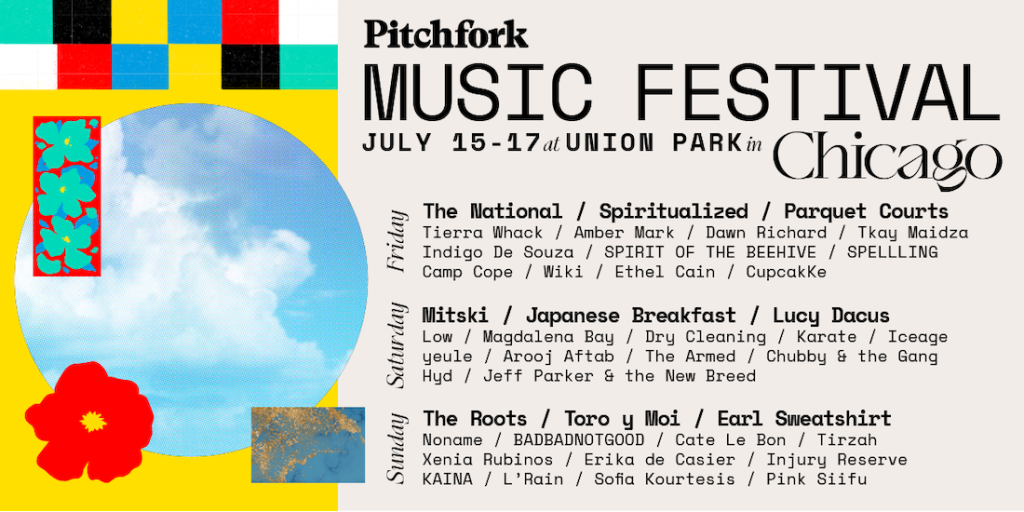 As part of my last hurrah here at the station and Santa Barbara, I’ll be heading over to the Windy City to cover this year’s Pitchfork Music Festival from July 15th through 17th! With one of my favorite lineups of genre-defining musicians this year—everything from nu-jazz to rap to R&B and synthpop—I wanted to highlight some artists that have graced our airwaves and music library. Stay tuned to KCSB for our coverage of the weekend’s festivities!

Real KCSB heads would remember when Spiritualized graced the stage at the Lobero Theatre back in 2008, but this space-rock band released one of my favorite records this year with Everything Was Beautiful. We highlighted it as one of our Adds of the Month back in May, and J. Spaceman has tugged on my heartstrings ever since. It’s emotional, beautiful, and harrowing, the perfect album to sit back to while the world around us seemingly continues to fall apart.

Dawn Richard has come a long way since being one of the defining pop girls of the early 2000s in Danity Kane and an R&B songstress in Sean Comb’s supergroup Diddy Dirty Money. With a successful solo career spanning six studio albums—her most recent triumph Second Line releasing in April of last year—Dawn’s takes on electronica and R&B are refreshing, forward-thinking, and energetic. Someone better put out an alert for my ass after this set because it’s gonna be missing from dancing so hard.

The Turning Wheel is one of the best albums of 2021. Period. The way SPELLLING stretches her angelic vocals across a range of upbeat chamber pop and long-form compositions makes me feel like I’m wandering through an enchanted forest, and it always makes me happy seeing someone from the Bay Area doing the damn thing. Hometown representation!

The only word I can use to describe Ethel Cain’s incredible debut album Preacher’s Daughter is devastating. Retelling stories of religious trauma and cultural persecution over sludge-y gothic Americana strings, Cain manages to find beauty in the madness. It’s a tough and heart-wrenching listen, but it’s already one of the best releases of this year.

Mitski has had a stellar year; from achieving her first top-10 record with Laurel Hell to embarking on a sold-out tour across the US and Europe, she’s forged her own path to indie-pop stardom. And with a back catalog full of deep cuts that’ll get the entire crowd singing, I’m confident she’s going to light a forest fire on stage (see what I did there?)

From her touching best-selling memoir Crying in H-Mart to her Grammy-nominated breakthrough album Jubilee, I seriously cannot put into words how incredible her work as a novelist and front-woman is. If I don’t get Vitamin D from the Chicago sun, I’ll certainly get some from her band’s euphoric set.

Growing up sucks It’s awkward, stuffy, and you’re just trying to fend for yourself while falling into other people’s preconceived notions. Home Video was like a rekindled look at your youth in a light more empathetic to the hellscape that being 16 years old is. Lucy’s set will surely end with me in tears, trust and believe.

LA synthpop duo Magdalena Bay came out swinging on their debut LP Mercurial World last year, and has remained a fixture in the station’s music library for when you just need to let it all out and dance. To say their set is going to be funky-fresh is an understatement 🕺

Brooding, bewitching, and beautiful, yeule’s 2022 release Glitch Princess was named Best New Music by Pitchfork last February, and they already embarked on a successful solo tour in addition opening for Charli XCX on her tour in Europe this past Spring. I’m looking forward to catching their set at the Blue Stage as well as their after-show at Thalia Hall!

Hey QT! Hyd’s self-titled debut EP released this past November featuring contributions from artists like Caroline Polachek, A.G. Cook, and Umru, bringing forth a more electro and alt-pop sound to a label that’s often extravagant. “The Look On Your Face” is my personal favorite, and they’ll be gracing the stage at Schuba’s for an after-show as well.

A rapper who needs no introduction, CupcakKe graces the Pitchfork main stage in her hometown. Her performances and lyrics are over-the-top and so. damn. fun. I really don’t need to say anything more.

A new resident of the Bay Area, Toro Y Moi’s Dead Ocean’s debut LP Maral is funky, smooth, and a perfect listen on a sunny day with a drink in your hand. I’m excited to lay on the grass with a slice of deep dish and soak in the chords of Millennium 2.

What is it with 4AD’s artists and them putting out banger records? Sensational is a smooth LP that feels like a blast to the 90s, and de Casier’s gentle delivery makes her lyrics only more impactful. Check out our interview with her from last year!

By The Time I Get to Phoenix is an album that’s equally hard to listen to and forward-thinking. Marred by the loss of member Stepa J. Groggs back in June of 2020, Injury Reserve’s first self-released album is inquisitive, introspective, and experimental. I wasn’t expecting to feel emotional after listening to the album the first time, so I’m curious to see how their music will adapt in a live setting.

Stay tuned to KCSB as we cover Pitchfork Music Festival 2022! Follow us on Instagram for updates and live coverage!