Matthew McPherson interviews Cain and Ryan of Park 70. This interview was originally done for the KCSB Zine 2020: Love and Light (coming soon!) 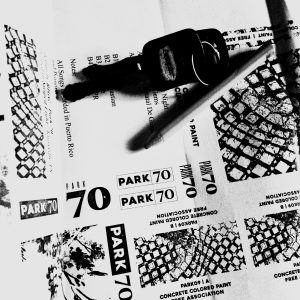 In general, what kickstarted the conception of Park 70? A lot of the droney sounds reminded me of early Kranky. Additionally, how much has it grown in the past couple of years?

Cain: Thanks, that’s a huge compliment. Kranky was—and still is—a great label. Now there are plenty of artists and labels working with droney and more ambient types of sound, but in the early/mid-90s when Kranky first emerged there was little else like it—at least in the US indie/DIY/underground. I haven’t followed them as closely in later years, but there was definitely a long period where I would have picked up anything with their name on it. When we started Park 70 I don’t know that Kranky was a specific point of reference, but in the earliest days of the solo project I do (Tatras) a lot of the early Kranky stuff—especially things like Labradford or Roy Montgomery—were very specific points of reference. So that stuff is definitely in my DNA.

The idea for Park 70 was launched on a long car ride from Knoxville to Memphis in the summer of 2017. We’ve been friends for a long time, share musical tastes, and have often played shows together. While driving, we talked about how we both wanted to find a way to collaborate together on something and the idea of doing a split tape came up, which eventually morphed into the idea that we should start up a label. At the time, I had a one-year-old daughter at home which made it more difficult for me to get out to see or play shows. I had done a label in the past and was excited by the idea of getting back into putting stuff out as a way to stay involved in music in a way that worked well with where I was at in my life at the time. The split tape between our two projects became our first release.

Our first releases came out in the Spring of 2018 and since then the label has grown from that initial idea of wanting to find a way for the two of us to work together to what it is now. As cassette labels go, our release schedule is slower than some, but I think we’ve set and maintained a very high artistic bar. I am continually in awe and couldn’t be prouder of the roster of artists we’ve been fortunate enough to work with.

Ryan: Park 70’s conception was as simple as two friends who have a shared interest level/wonder/frustration about the world (music, art, etc). It probably had to happen. I (in part) see it as a motivational tool for Cain and myself as well. It’s a good thing when an idea hits people at the same time and it’s fuel for the fire. I’m hoping that this venture will perpetuate more in us and the community that we gather. In the beginning, it’s always trial and error, but I feel that with the limited time we’ve had so far with Park 70, we’re learning and developing constantly. As far as our initial step, I’m super stoked with what’s happened thus far and super excited about things to come. Stay tuned! 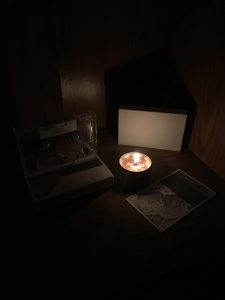 How was the robust aesthetic of letterpressed O-cards chosen and executed? These are some of my favorite tapes to hold/gloat.

Cain:  We definitely talked a lot early on about presentation and how we wanted to approach packaging.  But the aesthetic and design have 100% been Ryan’s work. Part of what is nice about that for me is that it allows me to fully appreciate the visual presentation as a fan without any of the self-criticism that I inevitably bring to my own work. I think what we’ve done has turned out really well. The physical presentation has been a really important part of what we’ve done and I feel like in that regard we’ve developed a really strong and distinct voice. I think it has also helped us in that we’re able to approach artists we’d like to work and show them that we’re committed to putting together something really nice for them.

All of the elements of our releases are letterpressed the—O-cards, the inserts, and the labels—which gives everything a really nice tactile quality. But also we print, cut, assemble, and glue everything by hand, and when you sit down and open up one of our tapes I think there is a tangible sense of it being an object that someone somewhere sat down and made. As a long time record collector, that kind of handmade quality to a lot of DIY records is one of my favorite things and is a super important part for me of putting together our releases. Of course, the important thing is the music itself, but not far behind that is that I love these things as objects in and of themselves. And I love the process of making them. I should also acknowledge here our friends at Striped Light (www.stripedlight.com), the print shop we work with to produce everything. They are very much the third silent voice of Park 70—we wouldn’t be able to do what we do the way we do it without them.

Ryan: Visually we wanted to give the music it’s due and treat t it w respect, give it a noble representation, etc. As with any artistic medium, it’s all subjective. However, we wanted to set ourselves apart and give the label a catalog feel—in hopes to justify the music while giving us an identity. This for sure will grow and develop as things progress. Again, stay tuned!

How many artists locally and internationally have you all worked with and does that play a part in the “small batch” releases of these tapes?

Cain: So far our releases have been split just about right down the middle between international (European mostly) and US-based artists. That hasn’t been by any grand design, but has been the result of reaching out to artists whose work we admire. That balance could shift one way or the other at any point. Most of the people we’ve worked with have been very prolific and are regularly working with artists and labels from all over the place. In addition, many are also operating their own labels and working with a diverse range of artists in that capacity as well.

Of course in a digital world, it’s easier than ever to reach out to anyone anywhere in the world and on our end working with an artist who is based in France or Belgium isn’t really any different than dealing with someone who is just a couple of hours down the road in Georgia or middle Tennessee. But also, the small corner of the musical world we’re operating in has grown out of a culture that has in many ways been shaped by underground networks of correspondence, tape trading, and long-distance collaboration. We’re a long way away from that world in a lot of ways, but I hope we are in some small way continuing in and contributing to that legacy.

We usually produce things in small batches of 2 or 3 releases at a time and in pretty small runs- generally 50 copies per release. Part of that is a practical concern—we dub everything in real-time and all of the packaging is printed and assembled by hand. It’s a fairly labor-intensive process. But the hands-on approach is an important part of what we do and why we do it. I’m proud of what we’ve done and I think our releases stand out in their own way. But it takes us a while to get these out into the world and keeping runs to a manageable size allows us to keep on as we’ve been doing it. But also, I’ve been in bands and have done labels for a long time and stashed all over my house wherever I can find room are old boxes of unsold CDs, 7”s, & LPs. So when we started Park 70 an important part of that for me, and part of what is really great about working with cassettes, is that we are able to put stuff out, get everything out there, and then clear out space to move on to the next project. I can’t really justify (nor would my wife tolerate) an approach that results in a lot of back catalog piling up around my house. What we’re doing seems to be working. We’ve managed to sell what we’ve made, but nothing has sold out so fast that almost anyone who wants a physical copy hasn’t been able to get a hold of one. At some point, we may be in a position to start doing some larger runs, but for the time being, we’re operating at a scale that works well for us.

Ryan: The small-batch aspect is (again) to give it a curated, special sense of affair. We work locally, stateside, internationally, etc. Everything/everywhere making sound is fair game.

Finally, a rat is going to jump in your mouth-head or butt? (We used to ask this to every band that passed through our studio) 🙂

Cain: It would be super gross to have a rat’s butt in your mouth, but mainly you’d have a mouthful of hair and skin. But I think the actual experience of having a rat’s head in your mouth—eyes & teeth & gross rat tongue & whiskers, etc. would be worse. As bad as it sounds, I’m going with the rat’s butt.

Ryan: There are enough viruses going around already, I’ll pass. However, it can run into my head. I imagine it will run out twice as fast.