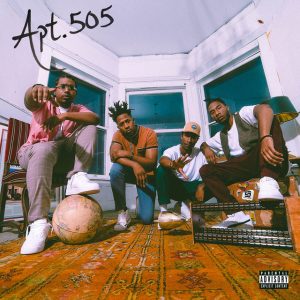 If you’re a fan of hip-hop and/or R&B, you’re probably familiar with the names of either Ras Kass or Teedra Moses. Both immensely talented artists, they have worked with some of the biggest names in the music game, spreading their influence all around the industry. What some may not know however, is that together they created some incredible musical talent, and I’m not talking about a new single or album.

Back in 1996, Ras and Teedra gave birth to a set of twins named Ras and Taj. Little did they know, these two would follow closely in their parents footsteps, trailblazing their own path within the music industry in the form of Coast Contra. Ras and Taj ended up recruiting Colombian-born RioLoz in high school to form the original trio that came up with the name Coast Contra, and together they dropped their first mixtape together, The Coast Contra Tape Vol. 1. Although this project didn’t pick up that much steam, they kept grinding, recruiting Eric Jamal from Philadelphia to complete and give us the group we know and love today.

With the final crew formed, they started off with a bang, having their debut single feature as the title track on the soundtrack of award winning film, Queen and Slim. They were able to collaborate with one of my personal favorite R&B artists, BJ the Chicago Kid, creating a must listen song that ended up on their debut album that we are here to talk about today, Apt. 505. Before releasing this album, they started to garner some attention with the release of multiple freestyles on their Youtube channel. Their freestyle over J.I.D.’s “Never” beat had the most impact on their career advancement, however I personally discovered them after hearing their freestyle utilizing Mobb Deep’s “Give Up The Goods” beat. Eric Jamal in particular killed his verse on the “Give Up The Goods” freestyle, changing flows effortlessly, showcasing his creative lyricism in the process.

With all this talk of singles and freestyles it only makes sense to talk about the most pressing release from this star-studded group, their album. As mentioned before, Apt. 505 is the name of Coast Contra’s debut project that was released this past March. With all of the hype building up from their freestyles, some may stress out and miss the mark, but this was not the case. This album did not miss a beat, figuratively and literally, producing some of the most infectious tracks that will immediately draw you in. “APT” gets the project rolling with a bang, with its usage of enthralling electric guitar chords, chimes, and even a flute, instruments one usually won’t be finding on a lot of rap tracks nowadays. As they even state in the song themselves, “it’s a method to the madness,” and I got to say, whatever that method is, it’s working.

Some other highlights throughout the album include songs like “505,” an upbeat track that jumps right in with a powerful verse from Eric Jamal addressing problems in America and his efforts to protect and uplift the youth, while still focusing on and gassing himself up. RioLoz also takes a turn in this song, rapping in both English and Spanish, something I always love to see. It exemplifies such an immense amount of talent, bouncing back and forth between languages mid verse and never slipping up once. Another personal favorite of mine is “Family,” the second to last track on the album. A beautiful song about the people you surround yourself with, backed by a little descending piano cadence that makes you feel at ease, a homey feeling that works perfectly with the song’s themes. They emphasize that, “if you think that we family, just know it takes more than blood,” placing more importance on trust and loyalty, and broadening the definition to mean more than just those directly related to you.

I could go on and on about each of the songs off of Apt. 505, which is exactly why it was a perfect add for our music library, but these are just some of the highlights that I really enjoyed. Any fans of hip-hop, rap, or just music in general should definitely give this project a listen, for it is definitely worth your time. With this only being their debut album, there is sure to be much more to come, and I hope they keep shining brightly enough to really make an impact on the music industry, because I know they have the potential to do so.

Posted in Blog, Music, Add of the month