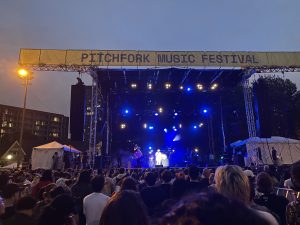 Pitchfork Music Festival is a 3-day festival held in Union Park, Chicago, and organized by the curators behind Pitchfork Media. Whether you love them or not, the website has long been an important platform to highlight left-field, alternative, and independent artists, and the festival they throw every year is no different. With this year’s lineup stretching across genres like post-punk and nu-jazz, to R&B and electronica, as well as rap and art-pop on three stages, I was intrigued by just how dynamic and diverse the artists performing were.

Two months and a flight from Santa Barbara later, I found myself at the festival grounds representing KCSB in the midwest. I wasn’t sure what to expect—I’ve only been to larger music festivals like Outside Lands and this was my first larger-scale show since 2019—but my experiences and conversations with concertgoers showed that this is something every music fan should try to attend at least once in their lives. I had a blast over the course of the three-day weekend. While I didn’t get to partake in as many media opps as I thought since I was too busy exploring, I believe that this festival is something every music aficionado should at least look into attending. 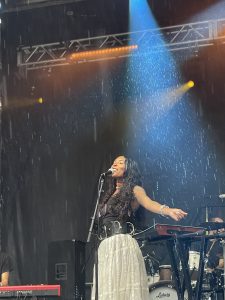 Day 1 started off with the hardest rain out of the weekend but some of the most enchanting sets. Ethel Cain started the day by performing some of my favorites from Preacher’s Daughter, bringing me to tears during “A House in Nebraska” then bouncing around to “American Teenager”, and finishing by appreciatively poking fun at Pitchfork (“[they’ve] always been so nice to me… actually I don’t know why I said that *laughs*”). Probably my favorite sets of the entire day were SPELLLING and Dawn Richard; SPELLLING performed during a torrential downpour and transported the entire crowd to an enchanted fairyland with her incredible vocal and synth abilities. Dawn Richard had one of the most high-energy sets of the entire weekend too, supported by a live band, two hype dancers, a meticulously laid-out set of hits, and some killer dance moves backed up by one amazing mullet. Monaleo filled in last-minute for Tkay Maidza and spit some bars, and I got to check out Parquet Courts for the first time. I ended the night by seeing Spiritualized’s set under the cloudy Chicago night sky—would’ve been nice under the stars but hey, what can you do.

Since I didn’t catch a whole lot of sets on Friday, I spent most of my time exploring Pitchfork’s grounds and speaking with fellow festivalgoers. Union Park’s very accessible by public transportation, with a train station spitting out right above it, so while there were some out-of-towners the majority of the folks I met at the festival were locals who were just commuting in after work on the weekend. The whole event space was about as big as a football field, so as someone who was used to trekking half a mile across Golden Gate Park in the mud to catch the next set, I felt comfortable and like I had room to breathe. I think this has to do with the crowd too—while it definitely skews towards an older, more diverse audience than something a bit more commercialized like Lollapalooza, the audience was a lot more laid-back and nowhere near as chaotic as I was bracing myself for. One vendor I talked to (shoutout BenjYehuda for the best cheese fries ever) mentioned they were told to expect 60,000 people the entire weekend but felt like it was a generous number, to give an idea of how small Pitchfork is. 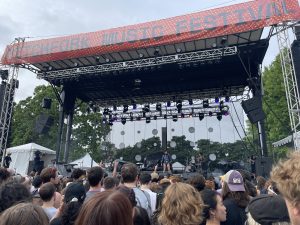 One collaboration Pitchfork hosts every year is a record fair in collaboration with Chicago public station CHIRP Radio, and I’m going to get straight to the point because there was SO. MUCH. GOOD. STUFF. HERE. EVERYTHING from rare vinyl pressings to imports to releases coming out literally the Friday of the festival all across so many different genres, labels, and mediums. I had to physically prevent myself from dropping hundreds of dollars because all of the booths from Beggars Group to Shuga Records had nothing but gems. A few signings took place that weekend as well, I got my copy of Mercurial World by Magdalena Bay signed by Mica and Matt! In addition to a vendor and art fair, I love how Pitchfork goes out of its way to highlight local businesses at such a stacked festival; another example of this is their yearly collaboration with brewery Goose Island, this year being a Japanese Breakfast-themed persimmon ale aptly called “Be Sweet” with a portion of the proceeds going to the grassroots organization Heart of Dinner

Back to the music; Day 2 had me running around like a maniac to catch all of my favorites in one day. Cupcakke started off the festival with the serotonin boost I needed: by getting the entirety of the festival to moan along with her. I got to sit on the barricade for Hyd’s set, it was so great getting to finally see a PC Music artist kill it live but I almost wish they switched stages with yeule; I think a more intimate stage would’ve been perfect for Hyd’s music and unfortunately, yeule’s set (which was amazing!) had some distracting audio issues. Dry Cleaning was one of my favorite discoveries of the whole festival, I’ve been trying to get more into post-punk and I like how their lyrics are a bit spoken word-y like Courtney Barnett. Magdalena Bay had one of the most fun and energetic sets of the entire weekend, following that up with Lucy Dacus was an emotional roller coaster but getting to see her cover Believe by Cher was AMAZING. Japanese Breakfast brought out Jeff Tweedy during their set for “Kokomo, IN” and a rendition of “Jesus Etc.”, and Mitski closed Day 2 by bringing the house down. Easily one of my favorite days of the festival, Saturday felt like an indie pop fever dream. 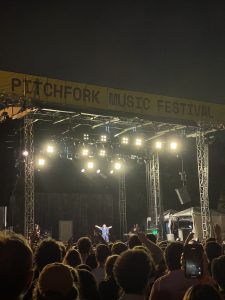 Day 3 was full of R&B, funk, and rap, and I had a chill time just bouncing from set to set. I got to the festival early to catch Pink Siifu’s set, backed up by Richmond jazz quintet Butcher Brown, and it was a real treat. Sofia Kourtesis and L’Rain gave two of the most unexpected performances of the entire weekend that blew me away; Sofia had a guitarist backing her up behind lively house beats and L’Rain’s experimental compositions played by a live band with a combination of instruments and digital synthesizers left me breathless. Injury Reserve was every bit as thought-provoking and emotional as I thought it would be, and getting to see Erika de Casier’s vocal prowess at her very first US festival set captivated me. Noname and Toro Y Moi were fixtures of my high school Spotify playlists, and getting to see them both in one day was really special; they brought out all the hits! I ended the weekend with a very special performance from The Roots, where they brought out Hannibal Buress and covered Kate Bush’s “Running Up That Hill.” A perfect weekend, if I say so myself.

I chatted with festival-goers both local and from out-of-town; they all say that the experience is what makes this festival special and worth the commute. With a crowd that’s more appreciative of the quality of talent being booked, to a wide variety of representation over so many kinds of music, and a concerted effort by the festival to incorporate local businesses, artists, and culture in the event, Pitchfork was a real treat. I can understand why this is a fest folks trek to every year for, and here’s hoping I’ll be doing the same thing again very soon.