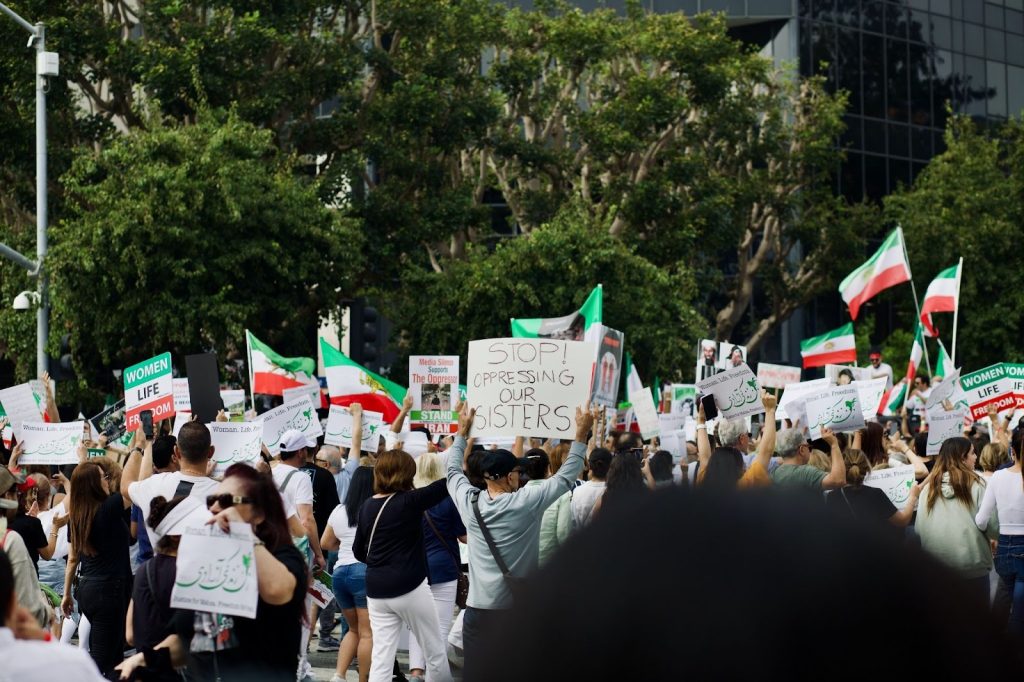 Music is a huge part of Iranian culture. From classical to jazz to pop to hiphop, Persian music covers every base imaginable. Before 1979, Iranian music was a meld of influences from around the world, merging them with a distinct Persian flair. However, after the Islamic Revolution of 1979, many freedoms were taken away from Iranian citizens, music being one of them. Pop music was banned after the revolution with many artists moving out of the country to continue their careers and escape persecution.

With the harsh rules put in place by the regime, tensions have been boiling in Iran for decades now. They reached a tipping point on September 16, 2022, when Mahsa “Jina” Amini died in Iran. While it was reported by the police force in Iran that she died of a heart attack, many witnesses saw the 22 year old violently beaten by police officers, which, taken in fact with her leaked medical scans, make it clear that police brutality was the cause of her death. The reason behind the violence? The police force said Amini was not following the mandatory dress code set in place after the Iranian Revolution in 1979, which includes being “properly covered” and wearing a hijab. Her unjust killing has sparked protests around the world, demanding rights for women in Iran.

One way Iranians have protested against the Islamic regime is through music. Persian artists have been singing about their homelands for decades. Now that the situation has reached the point of revolution, countless songs have been created to educate those about the new revolution and express their sadness and anger about the situation in their homeland. Below is a compilation of songs both new and old, dedicated to the creation of a new Iran.

One of the most prolific Persian pop artists of the 1970s, Sattar is the artist of many hits from the golden age of Iranian music. However, he was the singer for the Pahlavi Royal Family, so he was unable to return to Iran after the Islamic Revolution in 1979. This song is one of my favorites by him. From the subtle instrumentals to Sattar’s beautiful voice, everything about this song makes it clear that he is yearning for his homeland. Although they lose a lot of their poetry when translated into English, the lyrics express the sadness of Sattar and diaspora Iranians around the world because they had to leave their home. At almost nine minutes long, the song can seem a bit intimidating, but I think it’s definitely worth listening to to hear first hand Persian musical traditions and how actual Iranians feel about their exile.

Although this song isn’t specifically about a revolution or the state of Iran, I still think it’s a pretty cool listen. When I showed this song to my mom, she remembered having her parents play the music video on VHS, which I think is hilarious. The song is based on the famous Iranian children’ s story of the little black fish in which a little black fish leaves home and makes a journey down the river, meeting all sorts of characters along the way. The story had been banned before the revolution because it promoted free thinking and resistance. Ramesh takes inspiration from the story and sings about wanting to become a fish and swim away down the river.

Googoosh, aka Persian Madonna, was a trailblazer in Iranian culture. She brought about new musical styles and was a fashion icon, bringing a lot of Western trends to Iran. Her music serves as an example of this as well, combining classic Persian elements with Western influences to create something completely new. The title of this song in English is “You and I” and I think it is meant to be about a relationship that just isn’t working out. However, a lot of the lyrics can actually be read in a way relevant to the state of Iran post-1979, like saying how far apart people are from one another and that they are together yet apart.

I love this version of Jolene. It’s the perfect combination of Persian flare with the iconic Western melody. I thought this was a good song to include because it shows the cultural mixing that had occurred before the Islamic Revolution and just how different the situation in Iran is today.

I had to include “Gole Sang” on my list of Persian songs, as it’s one of the most iconic Iranian melodies ever. The song is all about unrequited love with the title meaning “my stone flower”. In this version, Iranian singer Hayedeh accompanies Anoushirvan Rohani, the original composer of the song. Although my favorite version of this song is sung by Sattar, you can’t beat the elegant instrumentals and Hayedeh’s strong vocals singing untranslatable sadness of the lyrics.

Persian New Year (aka Nowruz) celebrations are probably the biggest holidays in Iranian culture. From creating a haft-sin table to jumping over fire at Chaharshanbe Suri, Persians celebrate the New Year in a number of different ways. This song is all about Nowruz, mentioning all sorts of traditions in an upbeat Persian melody. However, the song is tinged with sadness, as Sattar knows he cannot return to his homeland and celebrate this important holiday with the rest of his countrymen.

Starting off with a bit of spoken word poetry, this melancholy song is all about missing the golden days of Iran. The dramatic instrumentals back up Hayedeh’s regal voice singing khodafez or “goodbye” to the roozaaye roshan or “golden days” of her country. This song is just heartbreaking, you can just hear the hopelessness in her voice. She does a great job of expressing the loneliness of being taken out of one’s homeland through the beautiful lyrics.

This song is probably the most recognizable song that has come out of the 2022 Iranian Revolution. The title, which translates to “because” or “for”, sings about all of the reasons that Iranians are protesting for. The song has been covered by countless individuals, many of them not Iranian, to spread awareness of the situation.

This song is another about the 2022 Revolution. It’s a rap song, setting it apart from many of the other songs on this list. I like how the title subverts the anti-America chant “Marg bar Amrika”, which means “death to America” in Farsi. It’s ironic that this slogan created by Ruhollah Khomeini would eventually be twisted to be used against his own regime. The lyrics are angry, clever, and, at times, a bit silly. The energy of this song is incredible and Shapur’s passion is palpable- I remember being transfixed on this song the first time I heard it, immediately putting it on replay.

You may recognize some of the names on this list of collaborators from earlier songs on this playlist. I think this song is probably the closest thing to an Iranian “We Are the World”. Some of the most prolific female Iranian performers, both new and old, came together to create this song about the Revolution. The song’s title translates to “again”, and the song is about Iran finally becoming Iran again. The chant of “Zan Zendegi Azadi”, or “Women Life Freedom”, can be heard in the background of the women’s powerful voices. Since so many of the protests hve to do with women’s rights in Iran, it’s really encouraging to hear some of the most iconic female artists from Iran come to support their Iranian sisters at home.