The Teragram Ballroom sits between a convenience store called Rosa Mini’s Market and a dry cleaners. Tall buildings with intricate scaffolding designs tower over this modest venue, which is just a 10 minute drive away from the heart of Downtown Los Angeles. It’s Thursday, July 7th 2022, and there is a line of young people waiting outside. They are, for the most part, dressed in dark clothes. Most of the men wear black or dark blue jeans and vintage t-shirts with faded logos and small holes around the shoulders. Some of the women wear baggy, high waisted light-washed jeans, cropped tank tops, and boots, others wear vests and bright colors in their hair.

My friends and I arrive at the venue as the sun is going down. I feel a warm breeze, smell the scent of the taco truck which awaits for hungry concert-goers, and see the reflection of a slowly dimming golden light on the shiny skyscraper across the street. I’ve seen Ty Segall once before at the Lobero Theater in Santa Barbara. But, this venue feels truer to the sound of the band, which is a perfect mix of extremely loud noise-rock and psychedelic rock. We stand in line and wait for the doors to open. I have a feeling it’s going to be a good show. 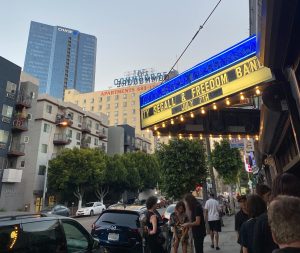 The venue’s interior was dimly lit. Its wallpaper was black with metallic bits poking through. Behind the bar sits pictures of Patti Smith and Robert Mapplethorpe, Debbie Harry, The Smiths, and The Ramones, which makes the venue feel reminiscent of the 70s legendary punk club, CBGB’s New York punk scene. While sitting at the bar, I can hear the thumping of punk music coming from the ballroom. As I make my way into the GA pit, I catch a glimpse of DJ Crenshaw, who sits on a ledge above the ballroom. He is playing vinyl from a crate, deep cuts like “Fatigue” by Blitz, and “Boredom” by the Buzzcocks. The main room is lit with a deep blue light, the ceilings are tall, slightly curved, and feature three circular sun tunnels.

Eager fans congregate at the front of the pit, they lean against the edge of the stage and wait for the show to begin. While most of the audience is on the younger side, there’s a good mix of people in this crowd. They range from being wide eyed high school students, to seasoned punk show veterans. One gentleman wears an old jean jacket pierced with a wide variety of small circular pins. Teenagers congregate in small groups throughout the floor, eagerly and happily looking around at the growing crowd of like-minded individuals. 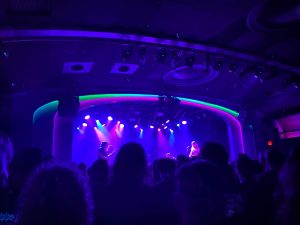 Suddenly the lights dim and an orange-haired Shannon Lay walks on the stage. She is alone, and she is holding a classical guitar. I can’t help but feel scared for her, as I know that the sounds produced by Ty Segall’s Freedom Band- the sounds this crowd has come to hear- are vastly different from the sounds an acoustic guitar is capable of making. Yet, I am pleasantly surprised to find that Shannon Lay’s voice is powerful enough to fill every square foot of the venue. She masterfully fingerpicks throughout her set, playing all but the last two songs completely alone. Her playful and charismatic banter with the audience makes her feel approachable. The sweet and low twang of her voice, which shines prominently in her cover of Elliot Smith’s “Angeles,” makes audience members sway and tilt their heads towards their significant others. Perhaps the most impressive aspect of Lay’s performance was her ability to fingerpick complex and fast rhythms while singing beautiful melodies which employed the full range of her voice. As Lay wraps up her set, people rush to the bathrooms, and exit the bar area to grab a spot for the main event- Ty Segall and the Freedom Band. 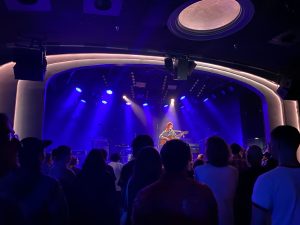 Ty Segall’s Freedom Band is made up of bass player Mikal Cronin, drummer Charles Moothart, guitar player Emmett Kelly, and of course, Ty Segall. They are currently touring in anticipation of the release of their newest album, “Hello, Hi.”

Much to my surprise, Ty Segall enters the stage in the same way as Shannon Lay, with nothing but an acoustic guitar. He plays two songs heavily strumming his guitar. The second song is abruptly cut off as the band rushes onstage, Segall rushes to switch from acoustic to electric guitar, and they all come back into the tune following a loud, fuzzy, droning sound made by the guitars, keyboards, and cymbals. The rest of the set is carried out in true noise-rock fashion. The band proceeds to play a set featuring hits like “Finger,” and deep cuts like “Alta.”. The crowd sways back and forth, people rush to and from the mosh pit, and the room vibrates with overdrive.

What strikes me most about Ty Segall is his voice, which is often harmonized with guitar player Emmet Kelly. His voice sounds almost like a groan, and when he gets into the heavier parts of his songs, it turns into a bit of a growl. His is a voice that will not give out. It’s got kick, it’s got bite, and it perfectly melds with the fuzzy tone of the band. The band also transitioned from songs seamlessly, which made the show feel like one cohesive performance experience. The transitions would sometimes be composed of long feedback tangents, but other times the band would jump from song to song in a matter of milliseconds. As the clock neared midnight, the band took off their instruments and walked off stage, but the audience was not ready to say goodbye yet. They cheered ceaselessly until Segall got back on stage. He came back once more with his acoustic guitar, and played “My Lady’s On Fire” as an encore. After this “My Lady’s On Fire,” the whole band played one final song, and then exited the stage.

The crowd dispersed into the street and made their way outside. The orange and green neon glow of the taco truck illuminated the street, the voices of the crowd were muffled by the ringing in my ears. Thinking back to the first time I saw Ty Segall at the Lobero Theater in Santa Barbara, I realize how much the venue and crowd plays into the quality and vibe of the show. The Lobero is a beautiful venue, but it’s regal and feels a bit too stiff for the raunchy sound of Ty Segall and the Freedom Band. Meanwhile, The Teragram Ballroom felt like a perfect venue for this sound. The crowd was also different at the Lobero. Perhaps because of the fact that the Lobero does not have a GA section, but instead has assigned seating, the crowd felt less connected to the sound. At the Teragram, the crowd swayed with the heavy vibrations emitted by the band and reacted to the music as if they were in conversation with the Freedom Band.

We drove home in silence that night; with the road ahead of us, the lights of the city behind us, and a steady ringing in our ears.