The metal doors of the 1720 clanked down as the lights dimmed. A human eye revealed itself onstage atop a wire monitor.  A bulb of light behind their set’s backdrop emanated red, seeping the colors of Injury Reserve’s most recent album cover, By the Time I Get to Phoenix, onto everyone inside the refurbished warehouse. It was pitch black outside, but inside the warehouse the sun was just setting. The world was being revitalized with synths and brandished drums coated with reverb and phasers in the background.

Parker Corey, the sole producer of Injury Reserve, entered from backstage. Corey stood center-stage with his production equipment, live-mixing the show. Just as the album was a heavier-turn for the experimental rap outfit, the live rendition of their music posited that same industrial sound. Corey used screeching, metallic versions of the synthesizers that were placed throughout the album, making the performance as jarring as the album upon first-listen. I physically squirmed in the crowd when I heard the equivalent of what sounded like an amplified construction site. Everyone in the crowd’s ears were ringing, but everyone still swayed with vigor and excitement – an understanding that this is the sound of the future; the sound that would push Injury Reserve through deep grief and acceptance of their future as a group. 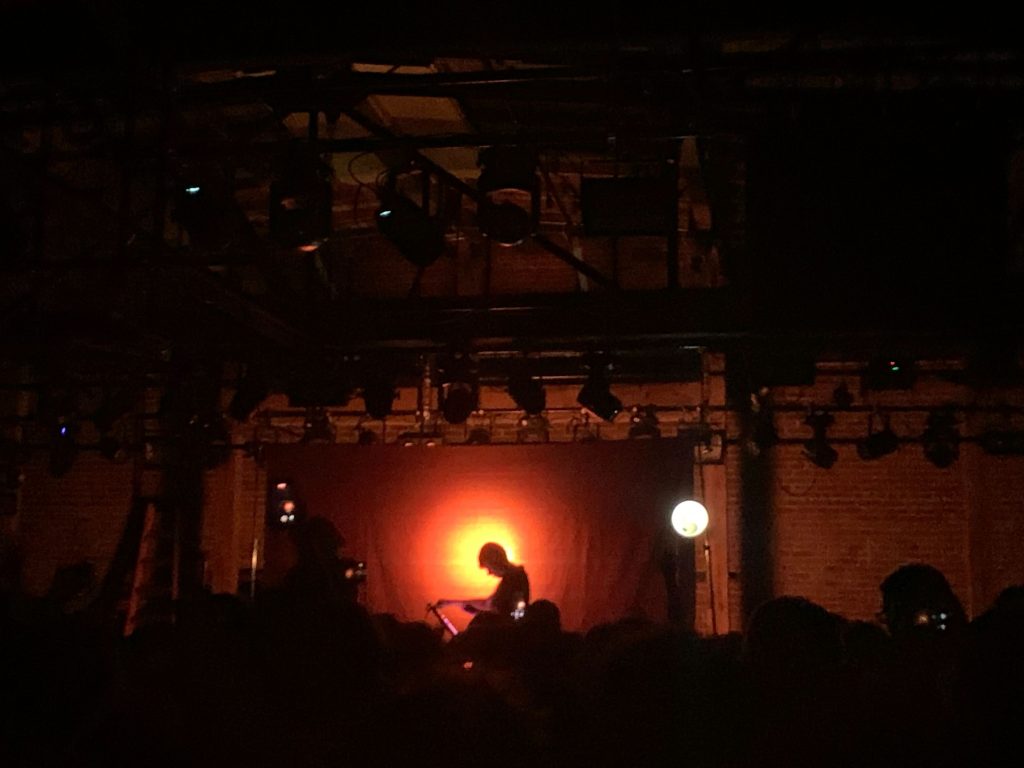 As Ritchie with a T came out to the opening song on the album, “Outside,” you could immediately feel the weight of his presence. He came out to applause, but it was obvious that he revealed himself for another purpose. Without any acknowledgment, almost as if he’d been onstage with Parker Corey earlier, he dove into the spoken-word-like introduction of the song. “Outside” is a perfect opener for Ritchie. The song itself is a tale of trying not to appease others, where Ritchie with a T slowly morphs his lines from the rhythm of a layman repenting to that of a rap song. The crowd was ecstatic, energetic and rambunctious, yearning for an ephemeral release complemented by the song’s emblematic, upbeat swing. The album isn’t accessible to say the least, and this was a room full of people who wanted to bounce to the tempo of harsh noise and heavy, forward-moving synthesizers. Injury Reserve embodied the atmosphere of a post-punk show and infused the space with spiraling rap lyrics as they carried out a full performance of By the Time I Get to Phoenix.

When “Superman Shit” came on, the crowd went crazy – slowly realizing that the duo would perform their latest album in its entirety. The beat itself is wonky, simultaneously glitchy and abrasive, but Parker Corey matched Ritchie with a T’s flow as he screamed, “Ain’t no saving me” over and over to the audience. The live rendition of this song confirmed their post-punk influence as Parker Corey drew out the song’s underlying sample of “Athens, France” by Black Country, New Road. The melancholic guitar chords fluttered as Parker played the outro of the sample, not featured on the album, and Ritchie with a T harmonized yearningly into the microphone.

Although the album begins with anger and despondence, the pair grew more and more dynamic as the show continued. With Stepa J. Groggs missing, the crowd was hesitant to jump up-and-down and open up mosh pits out of respect. But as songs like “SS San Francisco” incited an electricity throughout the concertgoers, by the time the pair reached “Footwork in the Forest,” everything was moving every which way – from the attendees to Ritchie with a T maneuvering the stage.

Pain edged itself out of Ritchie with a T’s performance as he recounted memories of his family and people he used to know in songs like “Postpartum” and particularly, “Top Picks for You.” He connected with the crowd, entering an unreleased verse that describes himself in the grocery store searching for the scattered remains of a person he once knew. Little moments in the show like this one, heartfelt eulogies that couldn’t find their place on the original album but were fitting for the full-length performance of the album, brought the project to life in a new light. The performance was what the album was meant to sound like, but more full and less scrupulous. In an empty warehouse, Ritchie with a T and Parker Corey delivered intimacy in the live performance, leaving it all on the table like the album’s opener foreshadowed.

As “Knees” began, the crowd grew silent and both Parker Corey and Ritchie with a T exited the stage for Stepa J. Groggs’ verse. The album was played in order, leaving silence only for Groggs’ presence during his past verses, but this was the only time that the two fully left. Even without Groggs’ presence, you could feel his impact on everyone standing there. I felt goosebumps as I heard his voice in the crowd; goosebumps as he forewarned the difficulties that come with unhealthy coping mechanisms and vices. I still get goosebumps when I listen to the song, thinking about how proud Groggs was of his physical and emotional growth, with his dreads symbolizing age and experience. No one moshed. Hardly anyone took out their phones for a photo or video. Everyone just stood there – moved. Then, the pair returned to finish out the album with the Brian Eno-etched “Bye Storm.”

After performing the album in its entirety, the duo decided it was time to transition to their earlier music. Starting off with the dark, “What a Year It’s Been,” Groggs’ voice echoed the room as he described his dealings with alcoholism and the changing times, despite the song being released on their self-titled album from 2019. But as soon as Ritchie with a T grabbed the microphone, the energy in the room shifted to vigorous as the beat became more punk and thrash.

The show then became as lively and active as Injury Reserve fans would have predicted. “Ttkv” played as an interlude of sorts, bringing the 1720 back to their oldest official project, Live from the Dentist Office, playing with experimental bells and soundscapes, giving everyone time to breathe before they opened up the pits. The infamous moshing began (at least for me) during “All This Money,” where seemingly everyone in the crowd let loose and decided to rap along and push around to lyrics about spending your entire paycheck on superfluous commodities that you don’t actually need. The crowd was screaming by the time “Oh Shit!!!,” another track from Floss came on, bolstering the spazz-like nature that has proved vital to Injury Reserve’s earlier music.

Ritchie with a T and Parker Corey closed with “Jailbreak the Tesla” for a perfectly manic and electrifying ending. The mosh pits pushed through, with friendly combat overtaking the crowd as the two finished the show with flickering lights and a fan-favorite that exemplifies Injury Reserve’s ability to rap about anything – even the most absurd and unconventional – over whatever avant-garde instrumental they deem fit. 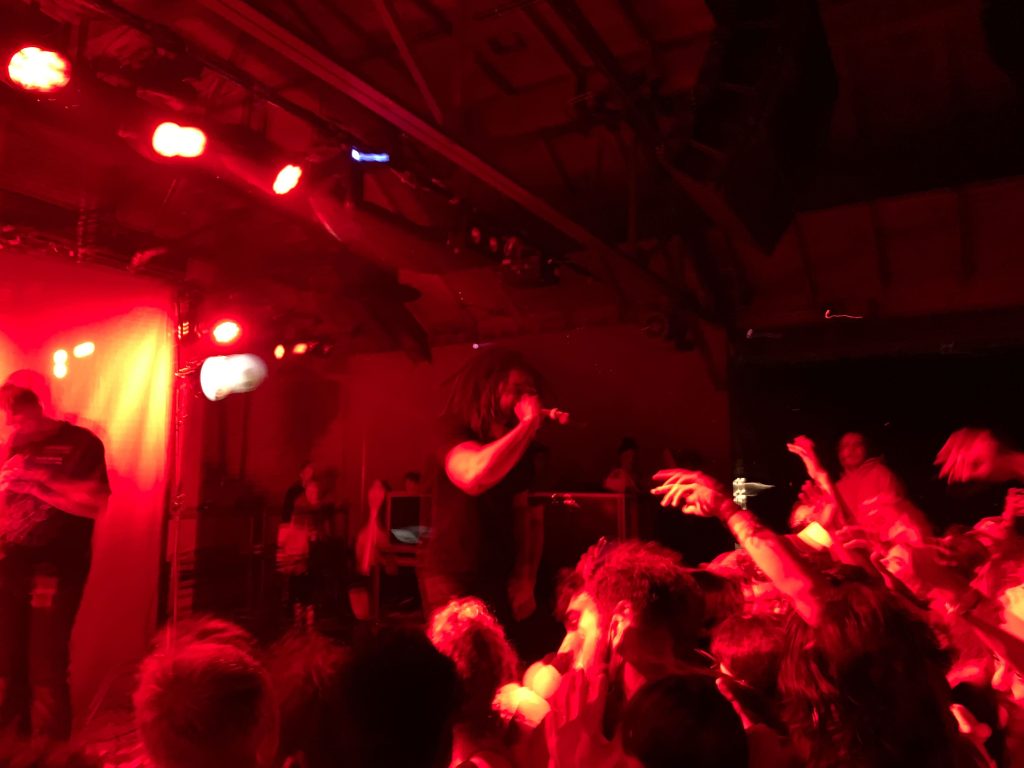