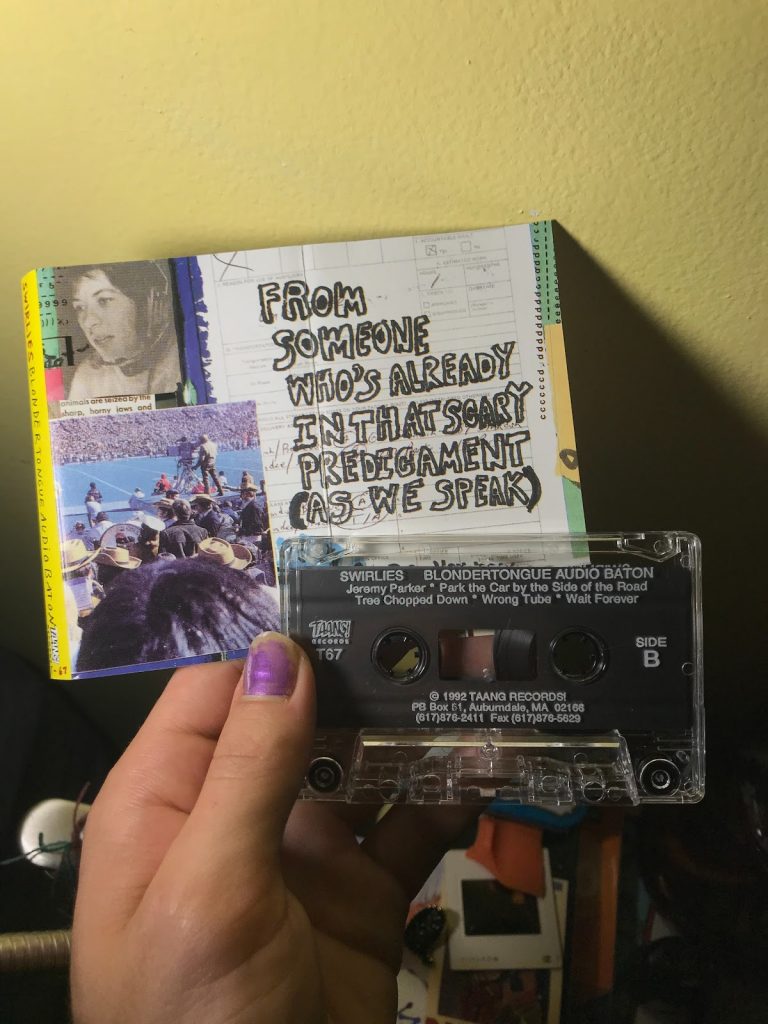 When Shoegaze begins to show up in American indie, it is often entering into a diverse mix of sounds. Simon Reynolds and Michael Azerrad’s Our Band Could Be Your Life casually notes how the link between the SST Records noise acts had become the basis for the early, primordial MBV, but by mid-1991 the landscape of American indie was in its golden era: networks of venues, zines, regional indie labels, were all cooperating and moving to their own whims, producing diverse punk, twee pop, and noise. As a result, each label developed its own unique sound documenting what was not being seen on MTV’s 120 Minutes (already in their prime). Yet, most were blissfully unaware of this new sound coming out of Britain.

Urban college cities and record stores would be the earliest adopters of shoegaze. With many of these early albums either coming out on import or thanks to American distribution deals, college kids garner an early adopter advantage and start hearing these bands they would never hear otherwise, turning shoegaze from a pop parade into punk that could shift on a dime. Slumberland Records documented a handful of the first American bands to start cooking up their own beautiful noise, Lorelei, Lilys, Velocity Girl, and of most interest to this edition of Shoegaze week, the Swirlies.

The Swirlies were a college band out of Boston with close ties to the DC punk scene and a penchant for guitar tuning and detuning in a fuzz of lo-fi hogwash (what the band lovingly and colloquially referred to as “chimp rock”). Their Slumberland releases, home recorded and radiating its own hiss, put them in a league of their own against noise pop peers, reveling in bassit Andy Bernick’s radio tuning and analog effects that hearkened to the spirit of Boston’s own Mission of Burma. In 1992, the band would sign to a Boston post-hardcore label, Taang Records and release What to Do About Them, their early compilation of Slumberland material for Taang. A cavalcade of sputtering post-harcore energy and mumbly vocal collages, What to Do About Them constituted a riveting mess of a primal shoegaze and is some of the top tier indie noise for the year 1992. Yet, looking in the context of the Taang roster, you’d get the sense that this band has absolutely no place on the label whatsoever, even as Taang was reissuing shoegaze pioneers, Spacemen 3.

When debut LP, Blonder Tongue Audio Baton (named for a graphic equalizer that the band was quite fond of while tracking the album) was unleashed to the world in February 1993, the Swirlies were articulating something beyond lo-fi noise pop. The cover collage’s scrapbook documents and scribble journal aesthetics are grounded by one unusually empathetic message, “From someone who’s already in the scary predicament (as we speak),” a glimpse of which is administered during the opening free-form white noise that crashes into “Bell”; a track complete with hilariously detuned guitars against whiny, sardonic vocals and cynical melodies, just in its first half alone. All of a sudden though, “Bell” seems to gain awareness and practically leaps to life with a post-hardcore tempo change in its last minute-with a schizophrenic energy flash and start-stop mentality rivaled only by SGC2C’s pulsing intro, before completely returning to a lackadasical space of nothingness. For an opener, it completely upends any notion of what could come next and always surprises me–this is how playful shoegaze can be!

And if not playful, the Swirlies seemed to be extremely well-attuned to a type of twentysomething boredom that is both meta-aware and bipolar. “Vigilant Always’‘ may feature near-lethargic drumming and near-iconic sadgaze-style guitaring worth wallowing in, but its vocal samples that practically call out the future, sensing track transitions before they arrived and reaching an explosive climax not once, but twice. “His Life of Academic Freedom” digs through a layer of analog machine sputters to reveal a My Bloody Valentine track, completely stripped of its overdubs and made to all sound like it is coming out of a toy telephone (with a sad trumpet in the mix for good measure).

“Budgetless” is a humorous shorthand that seeks to boil down the moments when the band supposedly dives into My Bloody Valentine territory  on “Pancake” and “Jeremy Parker”. Yet, this observation often cuts back at the band’s own originality in their sound, like when on “Pancake” Seana Carmody’s vocals opt to harmonize to the Moog Synthesizer while retaining a melodic, twee sensibility in her own lyrics (“I go to classes and I don’t wear my glasses”), a complete deviation from Billinda Butcher’s ethereal, genderless haze. “Jeremy Parker” owes more to Sonic Youth’s attack-and-release affairs, offering a lyrical callback to What to Do About Them’s “Her Life of Artistic Freedom” in between portraits of isolation (“christmas stevedore”) and terminal boredom (“drying shell/on sleeping pills”).

That transition between their EP and BTAB feels like a legitimate level-up that no one seemed to be noticing, and not any fault of the Swirlies themselves. By this album’s release in 1993, Taang was well on its way to become a San Diego based pop-punk label and the Swirlies were ready to jump ship. Yet just as 4AD was contemplating having them join the roster alongside two other east coast heavyweights, Belly and The Breeders, Taang’s contract stipulated that they owed the label two more albums and things fell apart. Members would leave while lead songwriter, Damon Tuttunjuin would further refine their sound towards a unique melding of prog indebted post-rock before strapping to the idea of IDM as the Swirlies faded into cult status, just another exceptional band from an era drowning in them.

In an interview years later, where Carmody documented their label woes, she also revealed how the band did not have control of their masters, leaving the vinyl out of print for several years…even as TAANG records was still selling an unsold backlog of the cassette edition on Discogs up until this year. When I picked the tape up last year, I had no clue what to think of its bizarre time signatures, lackadaisical instrumentals, and uniquely melodic delivery that went a level above monotone. Slowly, I came around to its own rhythm, while familiarizing myself with the twee and post-hardcore that surrounded it.

I came to see Blonder Tongue Audio Baton as the rare piece of lo-fi that had achieved “pulp modernism.” The way the album sounds and moves, combined with its dazzling array of sonic spectres, have more in common with a piece of speculative fiction reflecting an omnipresent boredom 8 minutes into the future (one that we all live in for the perpetual future). “Wait Forever” ends conveying this with a humorous audio sample between two kids debating whether they should drink Mountain Dew and snort mud, just because there’s nothing to do, and the fact that the intro to “Bell” practically sounds like this plan gone awry gives the album a delightfully circular finish. For a band that had already been in their own scary predicament, they sure sounded like they could warp their way out of it.

Next time: We conclude our tour of my shoegaze tapes with a look at Bristol home-recording pioneers, Flying Saucer Attack, and their Chorus compilation, to better understand the shape of shoegaze to come.