With our 2019-2020 Internal Music Director under self-quarantine, Matty McPherson (Wane Lietoc) has taken to their personal tapes, highlighting and documenting the most outstanding in their collection. This time around, they dive deep into Sonic Youth’s dreamlike Sonic Death. 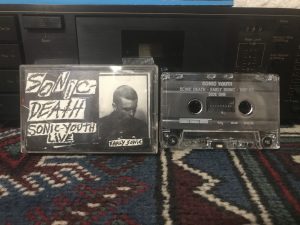 In Jim Jarmusch’s Stranger Than Paradise (1985), Eszter Balint’s character strolls through downtown New York. The place looks lifeless; closed up shops, dirty streets, and a sense of abandonment. Screamin Jay Hawkin’s “I Put a Spell On You” echoes through the tape player she carries. It’s a vivid snapshot in a film full of such moments, but nothing in the film comes quite as close to relaying such a salient visual of what the 80s No Wave music of New York reflected.

Stranger Than Paradise features original Sonic Youth drummer, Richard Edison, who by 1983 had left the band. But the sounds of his primal drumming can be heard on Sonic Death, Sonic Youth’s first live album and an exceptional curio from a band that brimmed with them. I started listening to it while playing Condemned: Criminal Origins–a slab of pulp horror that launched with the Xbox 360 in 2005. The primordial snapshot of SY’s live sounds collected between 1981-1983 are a dispatch from a decayed and decrepit tear of reality in line with Condemned’s crushing sound effects and impeccable bursts of horror.

Since I played “Teenage Riot” in Rock Band 2, I scrounged up the cash for a limited edition of “the Yoo”’s Daydream Nation, hoping for songs of a similar caliber. Perhaps it was just Sonic Youth’s way of luring an audience to the pleasures of noise as “Silver Rocket”’s bridge became my introduction into straight noise at the ripe age of 14. It was fascinating as it was indulgent, if not too abrasive to enjoy. Nearly a decade of cursory listening through a litany of other albums had been spent shaking Sonic Youth for an answer, when instead I could have just gone back to the beginning.

Sonic Death is a presentation of the band at its most primordial, as they navigate the No Wave scene of the 80s. The New York based art movement originating in the late 70s sought to reflect the conditions of a pre-gentrified, gritty New York; music often rejected form in lieu of emphasizing noisy, abrasive improv. By the 80s, No Wave was outright collapsing high and low art barriers to the degree Suicide and Talking Heads had done in the 70s. Swans sought to turn it into an industrial carnival while Glenn Branca embraced orchestration with symphonies for guitars. Sonic Youth was aligned with both acts. They toured with Swans (as a mic break at the end of Side B states) and Thurston Moore performed in Branca’s guitar symphonies. Yet, their aspirations seemed to be a bit more aloof. That is not to say that elements of both acts’ sonic palettes come in and out of Sonic Death. Taking guitar (feedback), primal drumming, and throbbing base, these early recordings have a flair for dipping between rollicking fiery punk and monolithic industrial soundscapes.

Self-documentation of these live performances were crucial. They were often the only times that these bands could afford to distribute and duplicate these sonic concepts to recording. Live performances of fellow No Wavers James Chance and Branca could be found on ROIR; UK industrial tentpoles like Throbbing Gristle made it the defining part of their catalog with dozens of live tape releases. Yet, where these bands would at least document the venue and date, Sonic Death shrouds the whole affair in mystery. No liner notes about venue, nor information besides “Side A-38:28” and “Side B-29:27” appear on any cassette edition (self released in ‘84 and on SST in ‘88, I have a copy of the latter). As ‘81-’83 implies, the tape is a collage of spliced fragments. Listening to it in small song-size excerpts is not encouraged nor implied by the tape’s meticulous sense of editing. Nor should one go in expecting 68 minutes of complete noise.

Sonic Death has a dreamlike quality. In between Moore yelling at an audience where you might learn what song is next, the tape embraces ambient punk dirges and pre-tuning breaks that act like deep listening spaces. When spliced together, it collapses all sense of time on the tape, rendering the tracks total spatial pervasiveness; effectively a full 68 minute dosage of this urban psychedelia to lose yourself in. Only here can the screams of Kim Gordon’s “TURN AROUND!” or Moore’s wry observations guide the pulses and abrasions of these improvs so vividly. It’s an effect that they were achieving on their other noteworthy release of this era, Confusion is Sex (1983), as well as further refining into an 18-minutes on Bad Moon Rising. Yet, both of those shy away from the the noise odysseys, as well as the surrealist level of splicing. Like when they use a sudden splice to inform that “Confusion is Next” is next before completely jumping to a point deep into said song. The edits are artistic quips that mark Sonic Death as an unlikely precursor to the way Godspeed You! Black Emperor employ unique field recordings and edits on F♯ A♯ ∞. But where F# feels like a whole movie with chapter breaks and cuts, Sonic Death is a video sputtering out of a broken machine.

Sonic Death remains remarkably fresh and perhaps a more crucial tent pole to “the Yoo”’s sound than given credit for. With each future release, SY headed out further west and continued to shift what their noise jams sought to convey. Even as the No Wave spirit and a fascination with pulp continued to ground their sound, nothing in their immediate discography quite approaches this. It’s a good thing the band was considering curation early on. Their SY Records imprint aptly presented artistic endeavors as oblique, reaching similar extremes on 1999’s Goodbye 20th Century. Although the closest parallels to Sonic Death are the garage noise of Keiji Haino’s Watashi Dake? released in 1981 and collaborator Bill Nace’s drones on last year’s Both. All albums operate as soundtracks to their own portal worlds, which might be the best way to explain why I found Sonic Death to work so well against a game as gruesome as Condemned!