With Internal Music Director under self-quarantine, Matthew McPherson (Wane Lietoc) has taken to their personal tapes, highlighting and documenting the most outstanding. Here’s their take on the latest Soccer Mommy album: color theory.

It rained last week to a degree that even the family iris flower could not ignore, blooming for the first time in years. It turned walks into hikes, causing mass flooding. And of course, the eucalyptus smell was ever-present again. It was also the time where a steady stream of packages arrived at my house, including my new Walkman, with actually working belts. For the first time, I was able to dive into parts of my tape backlog I worried would’ve been otherwise lost. With that grateful spot of luck, I took off on a walk to the park and listened to one such from that pile, Soccer Mommy’s latest, color theory.

Of all the bedroom pop contemporaries, Soccer Mommy (aka Sophie Allison’s musical project) seems to have been most tailor-made for suburban kids, with the way each 4/4-time structure seems to perfectly link to the walking of a block. It has been noted how her sound, inspired by Avril Lavigne, would have made her a Dreamworks Record alternative rock star 20 years prior. Nothing to scoff at, as Allison has a serious guitar pop bite with just the right balance of lo-fi flourishes and lyrical sketchbook of “stoner daydreams” and teenage wisdom that made her a breakout star 2 years prior on Clean, even as Sirius XMU’s insistent playing of “Your Dog” and “Cool” drove my father and I nuts. Yet, Clean happened to be one of my first tapes I picked up at the end of Fall Quarter in 2018.

None of the prowess of Clean is lost on color theory. Allison had just completed another round of touring before release and jumped to a larger Loma Vista label and the result is a deceptive piece of bedroom pop where everything matters. color theory’s packaging gamifies the Soccer Mommy identity (you’ll need a “Soccer Mommy Approved Portable Listening System” to hear the album, fortunately a tape or CD will do the trick, but you might want to read the “game manual”) and strikes the album down to three chunks centering on three lyrical centerpieces of Allison’s battle with depression.

The opening and most immediate section, Blue, features a refinement on Clean’s tracks, with bigger production and more space for excellent overdubs. Yet, mistuned guitars, noise breakdowns, samples of people walking and sugary strings, evoke pent frustration and an overarching sense of anything but sweetness and light. The stoner daydreams are gone and Allison is firmly set up shop alone in her bedroom, caught in cyclical cycles of “watching TV till my body aches” and “covering wounds with long sleeves.” Dreamy highlight “night swimming” imagines an escape from the mindset, with a dive into the water before coming back up alone, a note of rejection awaiting. Alone, like “a sinking stone,” the impact of Allison’s lyrics washes over you while in a dreamy lull.

The Yellow’s fascination with decay from illness attempts to pin what depression feels like (“crawling in my skin,” climbing “up the walls”), hitting hardest on standout track “yellow is the color of her eyes,” when she turns attention to her mother. Washed out guitars and cymbal heavy drumming patter like a constant reminder of Allison’s mother’s chronic illness. In the spacious back half of this existential burn where there is no answer, Allison offers a cathartic admission that “loving you isn’t enough.

In hindsight, opening the final section, Gray with “Lucy” proves to be a reward in itself. The song had been teased 4 months before the albums’ release, weaving its way into the setlist when I saw Soccer Mommy at SOHO in October. Even as one of the last shows of that tour, the energy was low. Allison joked about finally finding time to nap in the green room. Yet, “Lucy” was a standout of the show, even though I could not figure out why I’d taken a sudden 180 after vehemently disliking the studio version only hours prior. Accompanying the 8th track of color theory, the mistuned guitars sound demented and sinister, as the song slugs in pace. Before you know it, you’re in media res, caught directly in the crossfire of Allison pleading for Lucifer to stop taunting her and restore a mental balance. By the end of this short section, Allison is still spiraling like that sinking stone, closing on a confession of full-blown helplessness as she watches “[her] mother drown.”

I listened to a majority of this album, watching creek riverbeds overflow with the central theme of this album, water. Allison is adept at striking up dissonance by taking a series of lush pop instrumentals and filling them with a series of blunt admissions regarding her pain, anxieties, and existential dread. Hints of this were on Clean but never sustained for a full listen like this. It is an exceptionally paced tight wire walk of an album that, were it not for the three sectional codifiers, might have fallen apart. It contains a riveting set of singles that everyone I know (myself included) gushes over, in addition to cuts like “night swimming” and “up the walls” that still find cracks of light in her lyrics. Color theory did not strike me as one of the year’s easiest listens, but since that walk, it keeps going back in the Walkman — with the water sweeping me downstream in the process. ☀︎ 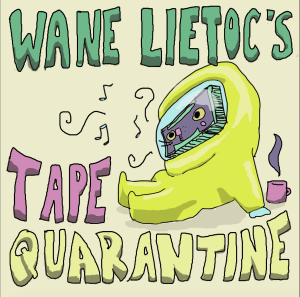 What else is good?