With Internal Music Director under self-quarantine, Matthew McPherson (Wane Lietoc) has taken to their personal tapes, highlighting and documenting the most outstanding in their collection. In this edition, they stumble upon a classic shoegaze favorite. 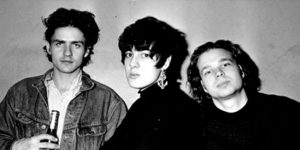 After a week of rain should be a week of sunshine, but the skies have opted to remain overcast with splotches of light that work their way through. On the best days, you can lie in that sunlight for hours and read or nap.

Last Tuesday, talking on the phone, I was asked about what oldies I was listening to. It caught me off guard, mostly because I could classify anything in the past three years as an oldie. When I started a tape library, what few tapes I owned months ago quickly become primordial forerunners to what is now the bulk of my wheelhouse. I had not felt an urge to return to the early dream pop and slowcore, but when sunlight inched out, it felt warranted. 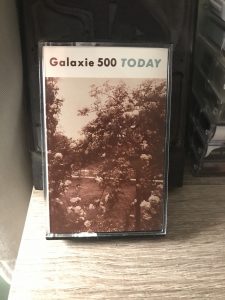 Slowcore is a sector of indie-rock that boils down a variety of genres to their slowest, most minimal forms. With a greater emphasis on texture, the wide-reaching swath of slowcore could be found and contextualized within the bounds of post-rock, dream pop, and even folk across the 90s. Yet, when Galaxie 500 began to emerge in the late 1980s, their sound was still inching towards slowcore salvation. Their sound was more in line with a devious strain of hungover Velvet Underground vinyl warmth and the indie-pop flair of the Flying Nun label (i.e. the only jangly indie that could out—R.E.M. R.E.M.). To put it bluntly, G500 was out-of-touch to the last decade of American post-punk and alternative development-they were a record store band. Still, following in a lineage of Boston bands (Mission of Burma, Pixies) that were unconditionally out of step as well, the group’s debut Today is a self-assured treasure of the American underground.

Awash in an airy swirl indebted to the Velvet Underground at their most sunbathed, the “slightly higher than lo-fi but could pass as 90s lo-fi” sound was produced by a no-frills enigmatic engineer named… Kramer. Kramer was a New York underground producer that quickly recorded albums without major overdubs-it often gives the albums he worked on from King Mystical to Low (another slowcore act to emerge post-G500) a spacious quality that alludes time. Nothing about this album could possibly seem to make sense, yet the album practically radiates warmth in the face of existential dread.

It’s a claim that only takes the first minute of opening track “Flowers” to prove. The buildup of Dean Wareham’s dusty guitar and Naomi Yang’s perpetually blissed bass against Damon Krukowski’s vaporous drumming strike up an apology worthy of a daydream:

And I could never bring you flowers

And I could never turn you around

I could be there when you’re sleeping

I could be inside your dreams…

The way Wareham half murmurs, half-harmonizes these lyrics with Naomi Yang in a ghostly bliss straddles a fine line between dejected apology and admission of want, only made more ambivalent with the simple addendum of an “Oh yeah.” On Today, the stakes never seem to get any larger than a daydream itching to its most anxious state. Even with a track titled “Temperature Rising,” Wareham seems more unnerved by a sudden burst of conversation fear spiraling into a panic attack over “why I came to this town,” as his vocals reach for a high note that comes off like a wail.

A complete reimagining of early proto-punks The Modern Lovers’ “Don’t Let Our Youth Go to Waste” poem turns into a near-7 minute sprawl of guitar scrawl and omnipresent atmospheric drums before just dissipating in a furious splash. “Oblivious” takes Beat Happening-indie pop (with a harmonica!) about a missed connection to its most ironic state before leaving you daydreaming about a lover, until you have to get up to grab another beer.

Through all of it, the energy always remains focused and minimal, never pushing into noise pop territory or Velvet-worship. This is the full-blown idiosyncrasy of being a kid in a college town with existential concern, regardless of how small, over what happens next. It’s a special tone crossed between the domestic bliss of dream pop with the dejection of slowcore, turning any matter of moments alone into singalongs.

Perhaps the greatest sense of Today‘s drowsy energy is found on closing track* “Tugboat.” With one of the most washed-out, heart-worn guitar riffs, Wareham conjures up the idea of being “a tugboat captain” opting to take a leave of absence from nuclear politics and pop culture, ever in search of a G-C chord combo drenched in reverb. The last two minutes play out like a sublime spectacle, with cymbals crashing and Wareham scratching out a solo like it’s going out of style. The song’s sheer will to go on might just make it the signature Galaxie 500 cut (but then of course, there’s all of On Fire). As it fades out, I know it’s time to let go of the daydream and give up the suntan.

Galaxie 500 would further open up a lane for bands obsessed with methodical, swirly pop on their follow-up On Fire and as a result, Today takes up oddity status: not quite slowcore, not quite dream pop, and all-too indebted to record store sounds of the 1980s. It revels in its own time and when you let the music wash over you, you too can enter it. ✦ 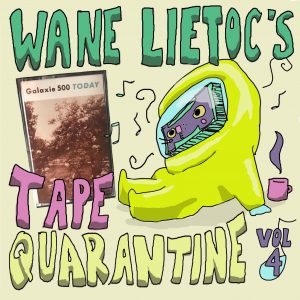 *Original pressings of the album from Aurora Records close with Tugboat while Rough Trade’s reissues (among others) have added “King of Spain.”