With our 2019-2020 Internal Music Director under self-quarantine, Matthew McPherson (Wane Lietoc) has taken to their personal tapes, highlighting and documenting the most outstanding in their collection. In the eighth edition of Tape Quarantine, they listen to Foot Village on his new Walkman. This week, he takes a look into the evolution of the shoegaze genre through various representative and influential albums. 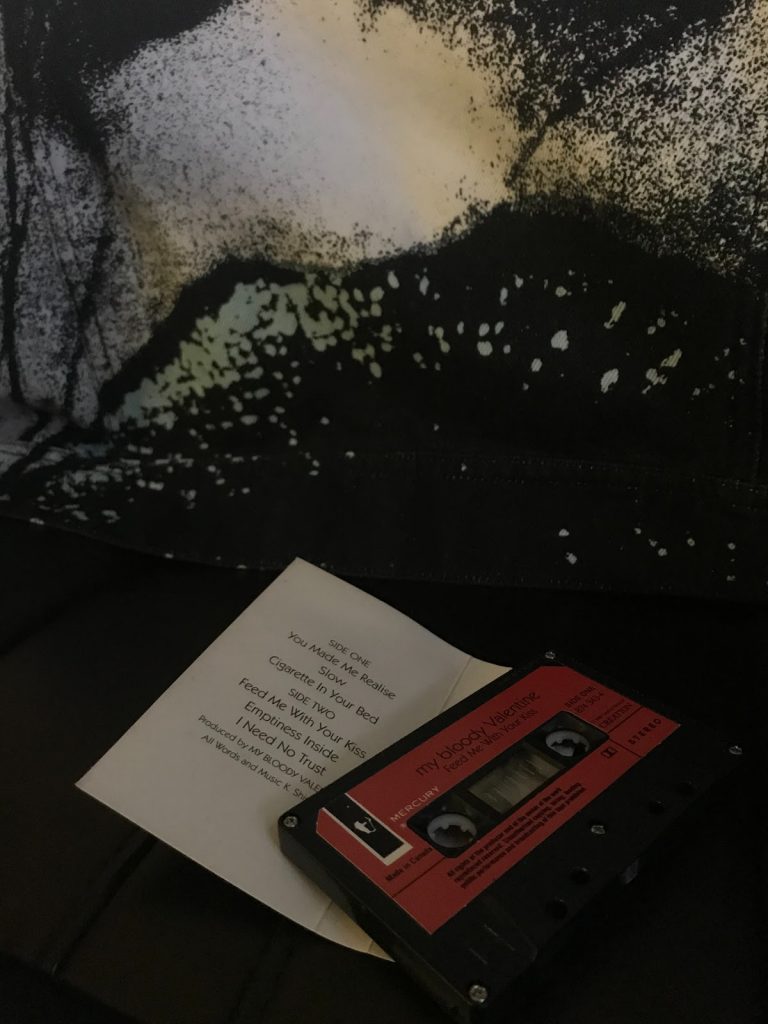 In December 2018, not even a month after picking up Mee-Eaux, I drove half an hour to an Oceanside record store to spend $15 on My Bloody Valentine’s EPs 1988-1991. It seemed like it would be a better purchase. Not only did it boast two CDs instead of one, it featured songs that are not on Spotify! 5 seconds into putting CD 1 Track 1 (“You Made Me Realise”) into the sound system of an omni-growling Volvo 240, and I was left with one splitting question:

So if this was the “birth” of shoegaze, then why the bloody hell did it sound so buzzy, grimey, and unpolished?

It was the same thought I felt when I first really heard The Jesus and Mary Chain’s “Just Like Honey” in September 2018, through the sound of my dad’s Bose speakers, which specialized in stereo acoustics that failed spectacularly at capturing their “razor hair splitting monopop” sound properly. It was the opening track from their debut Psychocandy, released in 1985 and another likely candidate for the “birth” of shoegaze (which in 2018 I also abhorred). If you stretched back further to Halloween of 1983, there was the Cocteau Twins’ euphoric Head Over Heels–which at least boast lush pop epics over lyrics that were beyond language and comprehension! No way “You Made Me Realise” was the start when you literally had the Cocteau Twins paving the way for (and even releasing albums in calendar year 1990 with) Pale Saints and Lush, two dreamy psychedelic, poppy, and (occasionally) noisy bands.

The story is more complex than I’m letting on, but by the late 1980s there was a continuum of bands making noisy pop in the UK–sometimes gothic, industrial, or twee (“anorak” as it was known) flavored. As this occurred, Kevin Shields had steered Irish quartet My Bloody Valentine from everywhere between derivative garage rock to unusually noisy anorak. Had they stopped in 1987, they would have been a cult noise pop band at best, or another C-86 throwaway. But in January 1988, Creation Records opted to let them make a record, impressed by their blistering live performances.

It was thanks to this deal with Creation that Shields, a fan of the nearly-unfindable Fender Jazzmaster, was offered a chance to play with a ‘64 model owned by a Creation employee, that featured a uniquely high pitched tremolo bar. In the span of an afternoon, Shields, tuning the strings together and strumming that tremolo, had inadvertently stumbled onto a swirly dissonant laden sound that was like a tape “copy of a copy of a copy”. He then proceeded to crank out nearly two dozen songs throughout 1988 that explored every inch of that sound, aided by the delay and gate effect processing brought upon by the Alesis Midiverb 2. The resulting tracks would result in 2 EPs (You Made Me Realise and Feed Me With Your Kiss) and an LP (Isn’t Anything) in quick succession across the last trimester of 1988–a record number of songs released that the band has proceeded to uphold for over 32 years running.

Somehow, the Canadian label Mercury curated selections from their EPs into the Feed Me With Your Kiss “6 song cassette for the price of a 7 inch”. No one at the time anticipated that this would be the only sanctioned cassette release of pre-Isn’t Anything material (that continues to elude streaming services) or that MBV would be selling the image on the cover as a $250 hoodie from Supreme just last spring (which itself led to this incredible document of hypebeast confusion and dismay, as well as unexpected gay panic). 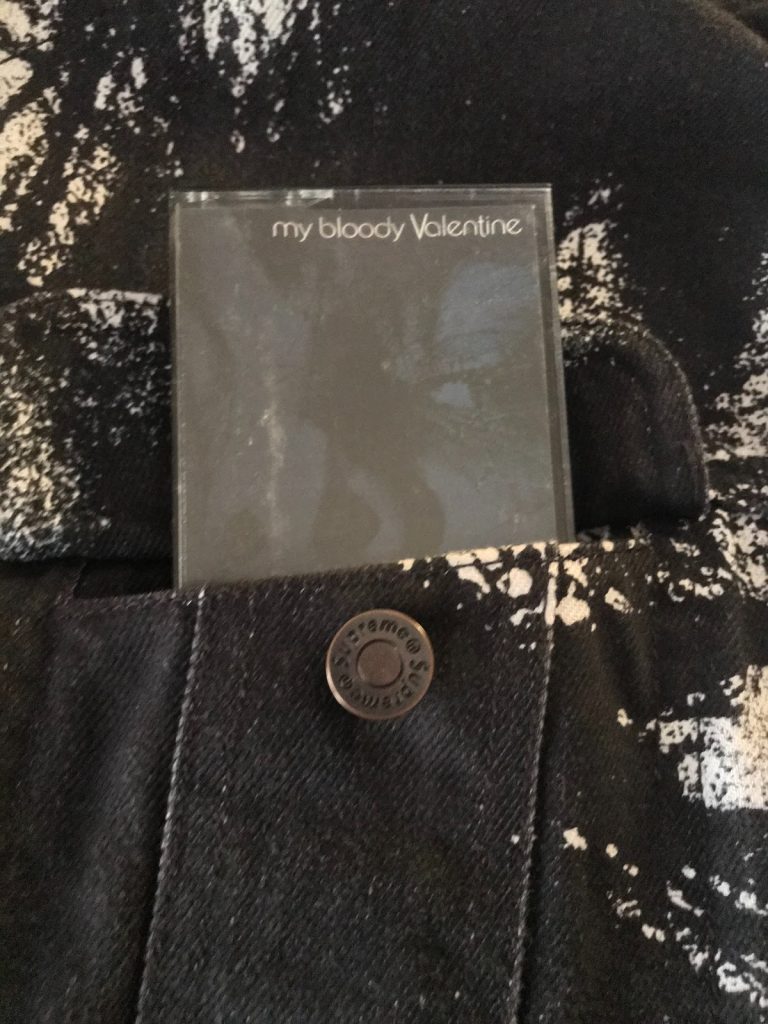 While the EP collection is missing a few songs (most notably, the uber catchy pop swirl, “Thorn”), the six on here are a crash course on where shoegaze had been and where it was about to head. Side A features three tracks from Feed Me With Your Kiss and at this point, the band was about as playful as they could be within the confines of their budget, gleefully breezing beyond their anorak sound. The noiseslop lead single featured a harmonized duo between Belinda Butcher and Shields documenting a slurred and aggressively horny demand to “feed me with your kiss” (the sensuality would become one of MBV’s defining factors). Shields’ stayed just as vocally slurred on “Emptiness Inside,” featuring a roaring motor of a sound grounded in Colm Ó Cíosóig’s rapid-fire machine gun snare drumming and “I Need No Trust,” a neo-psychedelic lullaby perfect for incapacitation. About the only criticism that can be offered is that they had put out an EP (of which three tracks appear on Side B) two months earlier that was just beefier.

Relistening to “You Made Me Realise” on tape, what amazes me now is how well Shields is balancing three ideas like a puzzle falling into place. First there’s the industrial gothic throb of that buzzsaw guitar and Cíosóig’s drum. Those choppy rhythms are not just erotic in their own devilish way, they embellish the “Byrds/Dinosaur Jr/Hüsker Dü continuum” that Simon Reynolds foresaw the band existing on–a link that many UK bands making early shoegaze had not quite connected to. Yet, underneath that sound is a genuinely simple pop song that you could hum to, if not sing along! Butcher and Shields hit a disembodied and featherweight harmonization that aptly conveyed their blurred out visions of romance, “insane eyes” and all. It was the perfect cherry on top of their “SST, but kinda goth” fusion. And then there’s the “holocaust section,” where for a 40-second bridge, Shields strums the living hell out of precisely one chord into a white noise cacophony–which sometimes they play for half an hour live. No, it’s not the birth of shoegaze. But who cares?! “You Made Me Realise” deftly conveyed the shimmering pop, erotic bliss, and sheer noise that was happening across these 80s “proto-shoegaze”, all in one explosive song-it set the bar for what could be accomplished, as well as where MBV was heading,.

And it did not stop there. “Slow”’s swirly, undead tape loop, pulsing bass, and stomping drums found a new way to redefine dub atmospherics with the brute force of a power factory. As Shields mumbled for a “Lick, lick, lick and suck, suck, suck,” he rather frankly said the quiet bits louder than any of their contemporaries. The EP closer “Cigarette in Your Bed” is the closest thing to a genuine rock song, with Sonic Youth “attack and release” atmospherics and Shields’ wistfully singing “doot-doot-doot doot-doot-doo-doot…” for the back half (lyrics that are legitimately acceptable). It’s a victory lap of a track and listening to it, you can practically hear a generation of British kids ready to go hog wild with pedal distortion.

Years later, the genderless ambiquity (that Loveless would perfect) in the lyrics strike the only commonality between Shields and Hüsker. That these songs were written within hours of each other makes it all the more magical. Even wilder is that the band has refused to drop most of this material from their live shows, 30+ years later. Perhaps, for one of these reasons or another, it remains a favorite amongst my former co-workers. So, here’s to MBV for making me realise, might it do so for ages to come.

Tomorrow: We’ll jump from Fall 1988 to March 1992, when a smattering of the first post-Loveless albums drop to a completely changed music landscape, and look back at Curve’s delicious industrial dance opus Doppelgänger.