With Internal Music Director under self-quarantine, Matthew McPherson (Wane Lietoc) has taken to their personal tapes, highlighting and documenting the most outstanding in their collection. Back in Isla Vista for the sixth edition, they review an encapsulating tape by psych-folk group Gercyz/Powers/Rolin.

When I finally made it back up to IV last week, the first task was not to move in but rather to check my mail. Before leaving IV, I had made a series of tape acquisitions that were weeks due to COVID. They had slipped through the cracks and I’d been deep in such a backlog already that I had forgotten about them until I arrived and checked my mail. 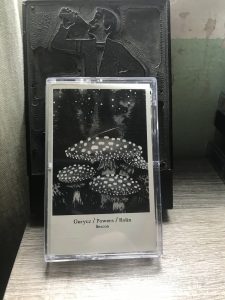 In the mail were two batches of tapes: one from psych-folk/kraut rockers Modern Nature and the other from Athens, GA-based tape label, Garden Portal. Garden Portal is aesthetically and operationally akin to many tape labels, limited runs of dozens of tapes bolstered by incredible artwork, featuring killer unknown talent. The latest batch from the label features up-and-coming guitarist Matthew J. Rolin partnered with Jen Powers on hammered dulcimer and Jason Gercyz (label boss at Unifactor Tapes and drummer of Cloud Nothings) on drums. Their collaborative tape entitled Beacon (featuring awesome mushroom artwork) was a huge leap for the small label, selling out the first run and about to sell out a second. And for good reason, there has not been this refreshing of a jolt of psych-folk in ages.

Even at only five tracks, this tape is still over a full 50-minute album of instrumental psych-folk improvisations that are fantastical and gripping. Opener “Cracked Steps” begins with a dulcimer tiptoeing through the hiss as if you’re moving from one life to the next. It’s a tense and exciting sound that rescinds to the background as Rolin’s jangly twelve-string connects the loose threads and weaves them into a melody in the foreground. All the while, Gercyz’s elliptical drumming adds more texture to the blossoming soundscape. Only three minutes in and the song is locked into a full burst directed to the unknown.

This template is one they follow in their next two tracks, “Black Coffee” and “Uphill March.” The trio is brought into a space where their sound combines into one that becomes malleable based on the shifts of Gercyz’s percussion, what drone sounds Rolin has loaded up, or the increasing frantic state of Powers’ dulcimer. To one person, it might sound like a calamity. To another, it is the sound of reaching to the unknown. “Songbird” is about the only major deviation from this template, itself a wandering folk instrumental that moves slowly yet brightly like a sun inching down across the horizon. Of course, “Velvet” ends the tape on a terrific note, weaving elements of the previous four songs with the drone of a saxophone and focusing nearly half of its length on small details or accentuations. There’s no jangly guitar until roughly halfway through, but when it arrives it hits like fireflies in the night. Gercyz’s rolling percussion loops ad infinitum and this song feels like it could drift until dawn.

The tape has a warm feel, even at its sparsest. It’s the perfect music for staring out into an empty intersection, where cars and people rarely seem to come by anymore. In a light fog, or at the end of an epic sunset, the fantastical Beacon is music that envelopes the moment and wraps you into it. If you can still get a copy, get to it! 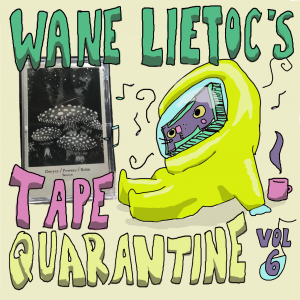