KCSB’s music department is sitting down each month to write to you about one album added to our music library that left a strong enough impression on them to be crowned Add of the Month. For August 2021, KCSB’s Internal Music Director Yousef Srour goes in depth on EBK Young Joc’s Forever 21.

Fair use of an EBK Hotboiiz album cover for review purposes. 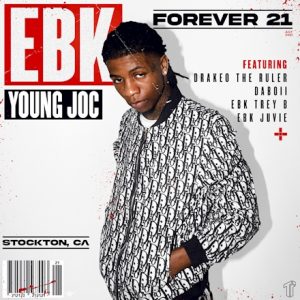 If you’re at a Bay Area function (house party) and they’re not playing EBK Young Joc, you should leave immediately. From Mac Dre to E-40 to Too $hort, there’s always going to be an opportunity for you to do the thizzle dance or scream “Bitch!” at the top of your lungs when “Blow the Whistle” plays — but that’s not what you want to hear at the function. When liquor starts piling up on the countertops and weed smoke is fogging up the backyard, turn on “Free My Thugs” and see what unfolds. The party lights start flashing, folks start wilding out, and everybody’s doing that one dance. Instantaneously, you’ll find your body rocking from side-to-side as your hands move up-and-down to the beat of the rumbling bass drum kicks.

EBK Young Joc comes out of Stockton, CA – a deceitfully discreet town that’s locally known around the Bay for having practically nothing to do. In 2009, Forbes labeled Stockton as one of the most dangerous cities in America due to its high violent crime rate, and by 2012, the city had filed for bankruptcy. Luckily, Stockton was able to escape its fate in February 2015, exiting bankruptcy and mayor Michael Tubbs distributing a universal basic income through the Stockton Economic Empowerment Demonstration (SEED). Although Tubbs wasn’t reelected in 2020, his impact left a mark on the city, giving Stockton a newfound life as the future looked bleak. Talent emerged from the shadows, with artists such as MBNel and Acito rising from the cracks, establishing an original sound for the city.

A turning point in EBK Young Joc’s career was when his brother asked him, as soon as he was released from juvie, “So, what you going to do?” After giving himself time and space, Joc recognized that rapping was his clear course of action. In 2018, the EBK Hotboiiz began their steady ascent towards local renown. With a remix of 03 Greedo’s “Sweet Lady” (another remix of the Tyrese song of the same name), EBK Young Joc, EBK Durkio, EBK Jaaybo, and EBK Juvie made names for themselves within the Stockton as the best new rap crew – later adding EBK Trey B, EBK Hari B, and EBK Osama to the roster as well. Their bars are known to be slick and jocular, passing each other the microphone to demonstrate their exuberant lifestyles and to mourn their brothers. At the end of the day, EBK stands for three things – Everybody Kount, Everybody Killer, and/or Every Band Kount. It’s rarely about the love of money; the EBK Hotboiiz are a prime example of how the blood of the covenant is thicker than the blood of the womb. Every brother counts.

Forever 21 is the follow-up to two tapes named after classic-TV shows from the late-‘80s/early-‘90s, 21 Jump Street and The Fresh Prince of Bel-Air. Self-released with support from Thizzler on the Roof, EBK Young Joc’s latest project is his most focused and pronounced. The album begins with “Mark Me Tardy,” an opus that could have easily been produced for Project X, but got cut from the film for being too rowdy. The song carries brooding strings that unravel Joc’s lyrics with mystery and allure. Alongside Young Slo-Be (who also hails from Stockton) and his fallen brother from Sacramento, Bris, Joc is a pioneer of whisper rap. EBK Young Joc’s raps are sinister, almost deviant to a fault as he maneuvers his city and all the trials and tribulations that come thereafter. His adlibs range from “Shhh” to “Ah Ah Ah Ahhh” as he compliments menacing production with soft-spoken lyrics that brush upon your skin like the blade of a knife.

Tapping in with Detroit-based producer ENRGY BEATS and Bay-Area producer Legend, EBK Young Joc’s production has developed into a gritty account of Stockton’s streets. “Wack Something” showcases Joc’s nostalgia, as ENRGY loops a sample that could easily be traced back to a fight scene from a cheesy ‘80s movie, or even a flipped, ‘90s R&B hit. This is a clear distinction between EBK Young Joc and his peers – with a constant effort to create controlled chaos, Joc releases music that can be played at the pregame and the party. You can tote guns to the music, you can pour one out for your brother, you can blast it in your car as you’re passing by the police department with your middle finger to the sky, or you can just kick it with your friends and do that one dance. It doesn’t really matter. As the muffled, drowned-out bass seeps through the room, rap along to the catchy hooks. Move your body and bounce to the beat. Address the mortality in EBK Young Joc’s music by enjoying the little time we have left in this dystopian hellscape.