KCSB’s music department is sitting down each month to write to you about one album added to our music library that left a strong enough impression on them to be crowned Add of the Month. This month, Internal Music Director Yousef Srour goes in depth on Naeem’s latest album, “Startisha,” released on 37do3d. 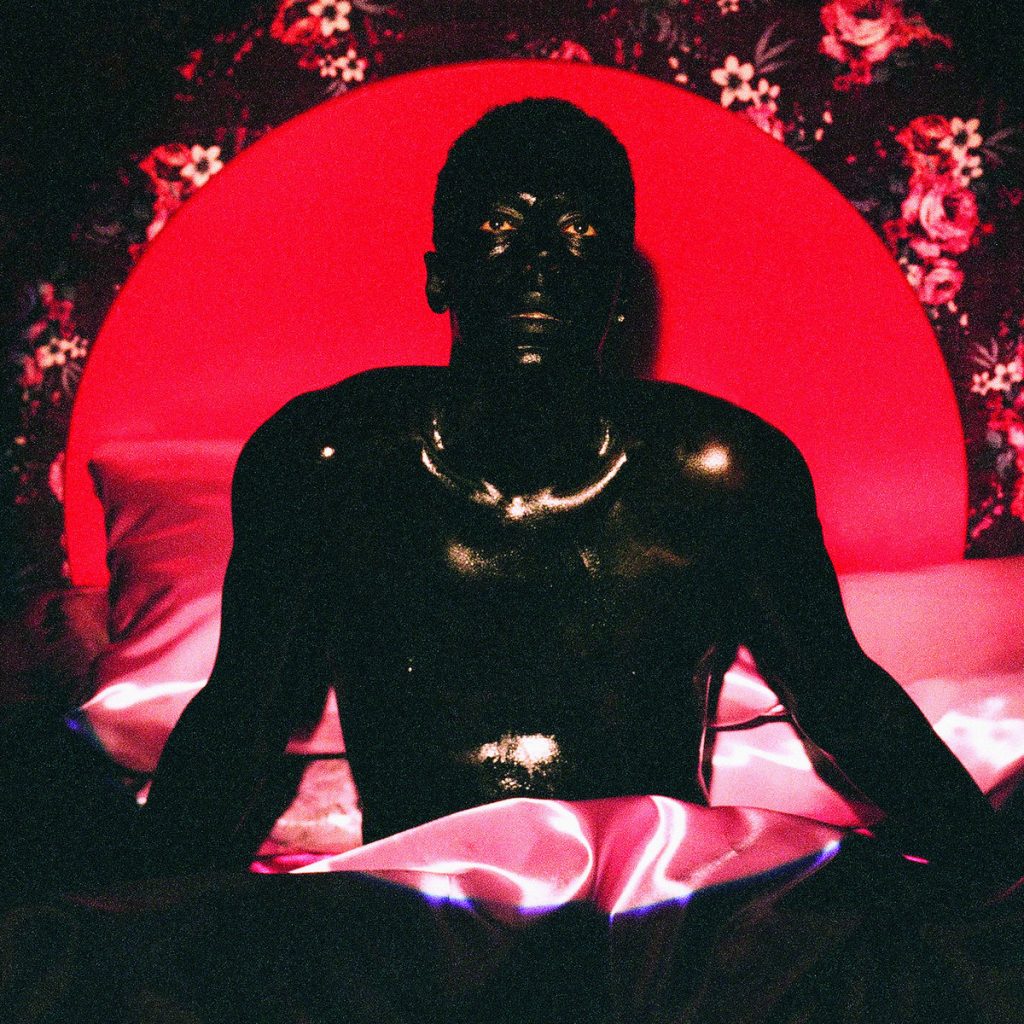 Startisha is the spiritual rebirth of Naeem Juwan. Formerly known as Spank Rock in the mid-2000s, Naeem was a staple in Baltimore clubs. He worked with producer XXXchange to make hypersexual party songs, utilizing heavy bass-lines and a flow that pulled heavily from Lil Wayne and André 3000. Now, Naeem has shifted towards a sound that is more electronic and on his latest, he provides an introspective analysis of the subtleties of human attraction.

The album is lush with its syrupy vocals and harmonies, drowning your inhibitions and absorbing you into this synth-led journey through love and lust. The project begins conceptually broad, hinting at the soon-to-be star-crossed lovers who will realize that there’s nothing in the world that really matters except for them. The synths have a certain buzz to them, and they pan ever so slightly, just enough so that you’re pulled into the world of Startisha – a person that you’ve never met, but you picture them looking up at you with glistening eyes and caressing you with their warm touch.

After the song “You and I,” the album effortlessly transports you to “Simulation,” a Justin Vernon (of Bon Iver)-produced, cerebral look at reality. Through Naeem’s narration, we’re constantly reminded that “nothing is real,” and therefore we must create our own worlds and creatively define our own lifestyles. He raps about driving foreign cars and fleeting love, but at the heart of the song is social critique. Naeem’s voice cements itself when he says phrases such as “Eat the rich,” and he reminds his audience that even though we might be living in a simulation, that doesn’t mean this manufactured world is anywhere near perfect, referencing Sandy Hook, ICE detention facilities, and minorities being disproportionately addicted to drugs.

As Naeem slowly loses his grip on the metaphysical, it’s only fitting that we enter the space of hypnotic, pseudo-psychedelic, club music. Rapping about dropping acid and taking MDMA, Naeem becomes trapped in “Let Us Rave,” continuing the idea of being in a simulation; for the time being, he’s stuck in a time loop where he’s chasing his next high. “They should just let us rave” rings in the background as we listen to Naeem’s id take full control over his consciousness, sporadically jumping from one vice to the next. This is continued on “Woo Woo Woo,” where we’re greeted with the perspectives of other partygoers, joining Naeem. It’s a perfect piece of upbeat club-rap – it’s light, it’s bouncy, and it doesn’t skip a single beat. The song brings you into a party built upon lust and freedom to do whatever your heart desires. The lyrics are LGBTQ+ inclusive, highlighting the non-heternormative Baltimore club-scene. It settles the debate that 2020 is officially the year of female rap, with vivacious, empowering verses from Amanda Blank.

Once the album reaches “Us,” we begin to understand that hidden within the passion on the dance floor is a desire for intimacy. Regardless of whether or not we know this to be true, Naeem isn’t aware of this fact. On the chorus, he repeats that he doesn’t care about the budding relationship, yet in a fleeting echo, you can hear that he’s fighting the realization that the “only one I really want is you.”

When Naeem accepts his love for the other person, the mood reorients itself accordingly. On “Stone Harbor,” we hear a joyous and carefree pop song, as he sees his significant other everywhere and is unable to contain his childlike-glee. Naeem’s love matures however, on “Right There.” It’s a slow-burning, electronic ballad for the album’s ambiguous muse. His drug high has finally subsided, and now, our protagonist is ready to settle down and build a home with his better half.

The album’s title track, “Startisha,” is the centerpiece of Naeem’s debut. The instrumental is bubbly and warm, and in Naeem’s voice you can hear his affection. But sadly, you also begin to hear wistfulness. He has finally revealed that Startisha is the name of his mysterious lover, yes, but we subtly learn that the two are no longer together. The song jerks your emotions in the same way the battering drums jerk your body in every which way. Naeem calls for Startisha out of longing, but this curiosity for how Startisha is doing is rooted in a fondness for someone who is now a distant memory.

Naeem treats “Tiger Song” as the closing credits of the album. This is the only song that isn’t directly associated with Startisha, but at the same time, the black experience is undeniably a part of Naeem, and therefore, his relationships. He says that he was “born a lover/raised a fighter” three times in the song, and he highlights the racial inequities that he has had to face, living as a queer black man in Maryland. It’s the literature and the influence of figures such as Malcolm X, Martin Luther King Jr., and his own father that taught him resilience in the face of the oppressor, as well as the two different approaches to attain justice. Every word on this song is impactful and carries weight, so by the time he proclaims that his ‘hood will rise up and will no longer be enslaved, you can tell that Naeem has spoken his peace–not just for West Baltimore, but for the treatment of black people across America.