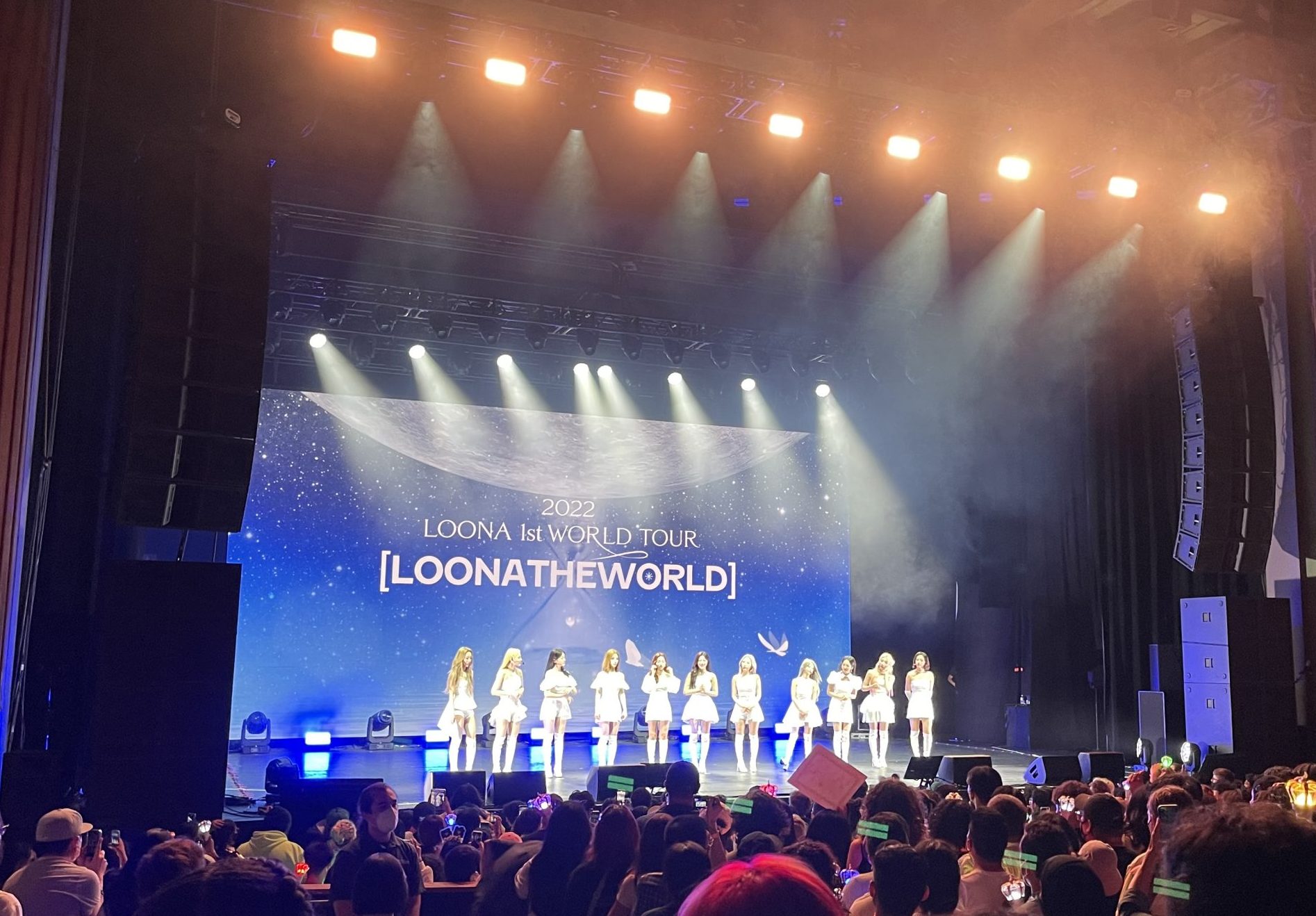 It’s a Tuesday in Koreatown two hours before the venue doors are scheduled to open and the line for general admission already wraps around the block in a complete loop. Wiltern staff are perplexed at how to manage such an impassioned audience and make sure the intersections of K-town stay clear. I was already kicking myself for not getting there earlier, only to learn the line had actually started the night before with people tent camping on the streets of Koreatown to guarantee a spot in the pit.

Despite waiting hours in the hot LA sun, the pent up excitement is still clear on people’s faces. This tour is a long time coming. Loona debuted in 2018 and quickly amassed an occult following, particularly among international fans. Their underdog status in the realm of K-pop

The juxtaposition between the smaller less assuming venue and how passionate the crowd was made for a special experience. 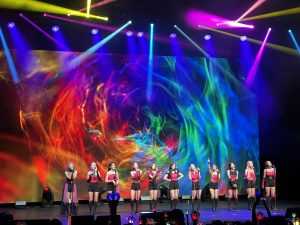 After an incredibly successful run on MNET’s Queendom 2 where they earned a narrow 2nd place and 2 music show wins for their latest track Flip That from their Summer Special Album, the girls utilize this momentum to steam forward into a world tour. Rather than support a specific project, LOONA’s 1st World Tour: [LOONATHEWORLD] gives equal attention to all of Loona’s discography. Loona consists of members Heejin, Hyunjin, Haseul, Yeojin, Vivi, Kim Lip, JinSoul, Choerry, Yves, Chuu (who was not present at the concert) Gowon, and Olivia Hye.

The show begins on a strong note with the song So What, a bombastic girl crush-esque track with rich layered vocals. The booming bass of So What leads right into 열기(Heat) and then Star, an 80s synthpop track in English that makes for a great conceptual transition out of Loona’s aggressive pop era of that was 12 00 and into fan favorite with the elegant synth track Butterfly.

Having 12 members, (11 at the concert, due to a member Chuu’s schedule) a large group even by Kpop standards, never seemed to weigh the stage down like one might expect. Loona takes advantage of this number with complex choreographies and formations to create a dynamic stage.

Loona’s predebut project, which consisted of a mini album from each member and 3 subunit albums, gave each member a clear identity and flavor they added to the large group. We even got a small taste of predebut with the subunit tracks of one way by Loona’s yyxy followed by You and Me Together by Loona ⅓ and LOONATIC – Eng. Version by Loona’s Odd Eye Circle. I was really impressed by their live vocals which were especially highlighted in subunit stages. In Kpop, lip syncing is pretty commonplace when you have groups singing and dancing on  intensive schedules to avoid vocal strain and also create consistency in performing. But the girl’s mics were most certainly at full volume without even a backing track for support throughout the concert. Tracks like Butterfly and LOONATIC are sung almost entirely in a high falsetto and showed the group’s vocal stamina. 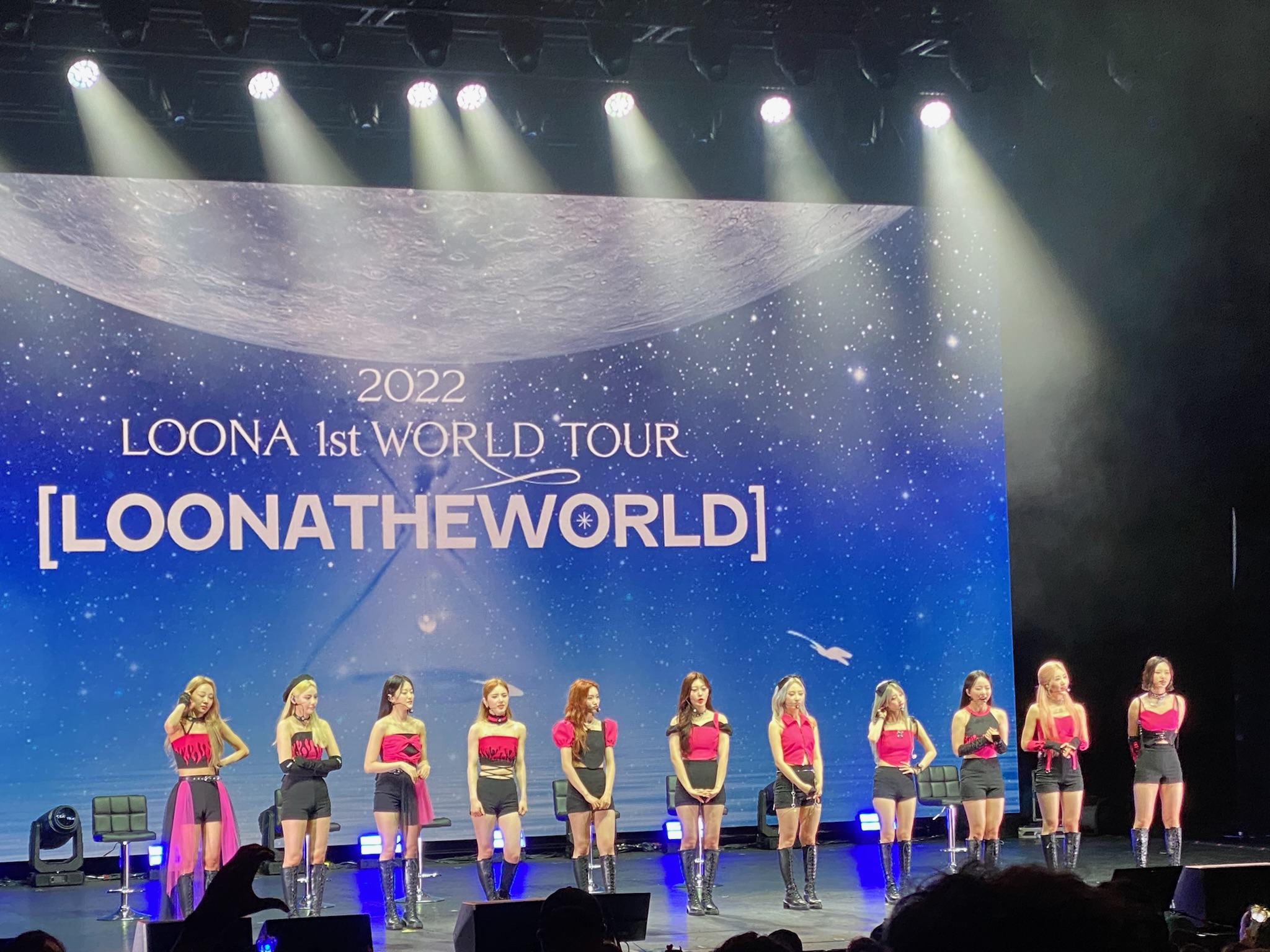 Loona managed to show off their musical and conceptual versatility throughout the various tracks that span their 5 albums, while still feeling authentic and unique as filtered through their members. The production often features just-outside-of-mainstream electronic elements and melodies that make this brand of quirky pop feel it belongs to Loona. Groups like Red Velvet or NCT implement similar techniques in their own production to craft a signature brand of pop with the Kpop umbrella.

Loona’s stage presence is casual and down to earth. They seem a little nervous, but still communicate their thoughts clearly as they talk about their excitement for the tour and how they want to provide a great stage for their fans. The girls are funny and charismatic as they interact with the audience throughout the show.

The setlist ebbed and flowed between intense dance numbers and  more minimally quirky bubblegum pop, giving the audiene time and space to appreciate all the different colors they experienced in the performance of each song. The likes of POSE, a brash more hip hop leaning number and standout PTT(Paint the Town) another brash but bollywood inspired track really blew me away from a performance perspective. The Wiltern was electric and completely alive as the girls commanded the stage with dynamic and aggressive production supporting their stage presence. More laid back, cute tracks such as Pale Blue Dot and WOWwere groovy less intensive tracks that showed the soft fun flavor Loona also excels at. The vocals continued to shine in the second half of the show in spite of it containing some of their most intense choreo. 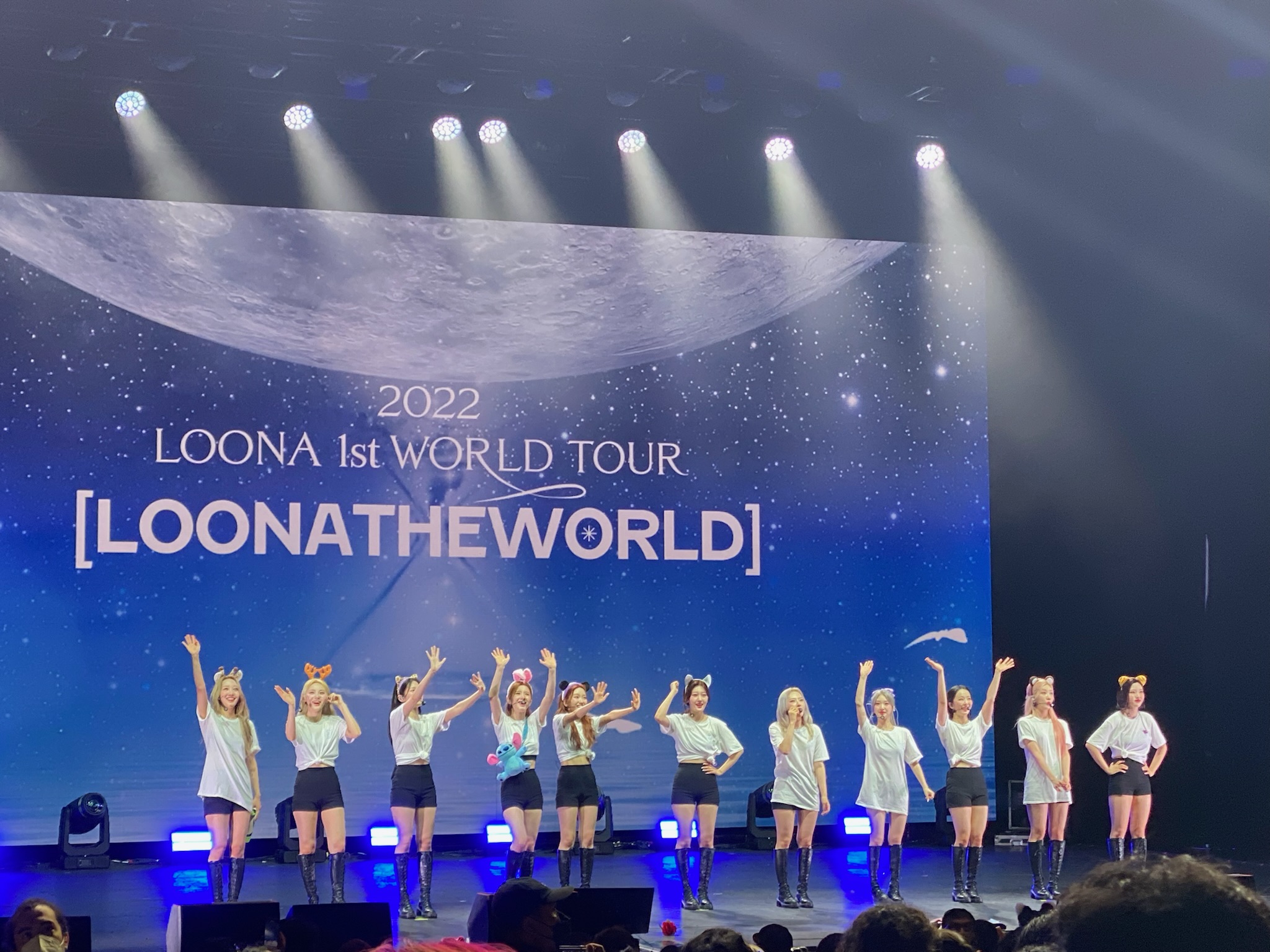 The Wiltern is not accustomed to host acts as visual as Loona. The venue had 3 levels on the bottom floor as well as a second floor that all consisted of general admission. However with flat floors, you had to be at the very front of your level or above average height to consistently see the performance. While you could see the graphic screen, a huge component of Kpop concerts are the dances. Fans have waited 4 years for the chance to get a glimpse of the 11 girls on their first world tour. With tickets selling out in 10 minutes of release and there being two consecutive concerts in LA, due to extra demand, a larger more concert – oriented venue would have been much more appropriate. Their SF date on August 4th was at the Midway, which is basically a club, so this will likely be an ongoing issue on Loona’s 1st World Tour.

[LOONATHEWORLD] was an unforgettable experience that sent me ~INTO ORBIT~.  I wouldn’t have had my first Kpop concert be any other act. Loona brought over 2 hours of energy, versatility, and pure talent to the Wiltern stage. The girls pieced together an incredible and charismatic show, I found myself appreciating their talent and artistry on a new level. Lastly, Kpop concerts prioritize the art of performing specifically in a way I am not used to in other concerts. My eyes had to be glued to the stage to get the full experience rather than necessarily immersing myself in the music itself. I almost wish I had gone to two shows one to watch and the second to just listen there was so much to process. This is definitely not as appreciated in a lot of Western music, but the visual element of a show and connecting with the audience really enhances the concert experience. 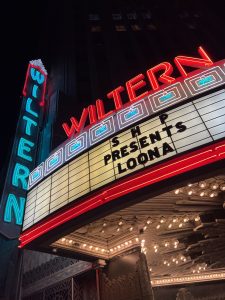