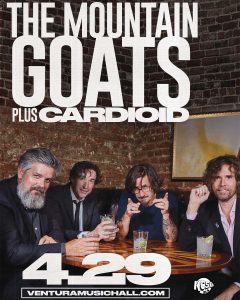 On Friday, April 29th at 9:00 PM, The Mountain Goats with Cardioid, will be performing at the Ventura Music Hall.

The Mountain Goats are known for their lofi-indie-folk rock releases on the Merge Records label. Since the 90s, The Mountain Goats have produced an extensive discography with a distinct folk rock sound.The band’s music has been featured in the Showtime television series Weeds. The night’s special opening guest is Cardioid.  Cardiod is described by the artist as “fantasy metal” and evokes a variety of dream pop and synth-based sounds.

Ted Coe and George Yatchisin of our weekly PA show “Schooled Radio,” spoke with the core band member John Darnielle from his home studio in Durham, North Carolina. The interview will air this Monday, April 25th at 11am on “Freak Power Ticket.”

Tickets and more information can be found here.  KCSB is a media sponsor of this event.