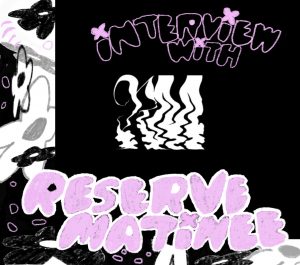 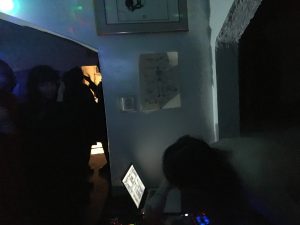 Where’d the name Reserve Matinee come from? I’ve always been listening to this music at night!

JD: Haha. We had a few lists of names going and “Reserve Matinee” quickly became a favorite. This was during a very inspired, hazy-yet-electric time of finally doing something we had been discussing for months. In the trashed living room of a place called the Viceroy. It definitely happened at night, and we did previously spend some time seeking imagery and inspiration from our neighborhood (just to keep things close to home), which happens to be one of the original theater & entertainment hubs in the US. Like from the jazz & silent film era. There is something otherworldly about Uptown at night. We don’t approach that as a concept though, and we avoid over-romanticizing the vibe; as an artist, you have the opportunity to simply take what’s around you and allow it to inform your own experience. I’ve been enjoying getting back into the history lately however, it’s fascinating.  Might get ripped and go walk by Charlie Chaplin’s old studio.

MS: I never really thought much into the actual temporality of the taxonomy but point taken—I feel like John and I both have a pretty cinematic conceptualization of electronic music, not so much in terms of it fitting into movies themselves but more so the idea that sound itself is capable of achieving a cinematic impact—seeing sound/synesthetic engagement with sound. The label name tries to exchange a sort of sight of sound/different vision of sound with our listeners, whether that ends up being at day or night time. It is a play on words in that respect, in that we genuinely hope our releases enable people to have a deeper engagement or insight with them as discrete sound objects/releases; I suppose ‘reserve’ can also be a verb you would use to claim a spot in advance at a matinee, in addition to a cache of tapes; entendres for life.

In general, what kickstarted the conception of Reserve Matinee and the intent to document the Chicago experimental scene? Any other experimental labels that influenced?

MS: Mainly to release lesser-heard sounds from our friends in Chicago and the Midwest (and beyond). John and I are engaged and involved in the local scene and have been throwing various events from house shows to larger all-nighters since 2018. So it came from wanting to provide a platform for artists who normally have not had a chance for a physical rendition for their music, and tapes make that accessible.

JD:  Friendship, and a shared desire to put out tapes. Definitely influenced by other labels that came before us since we were both involved in DIY scenes, earlier on. Being from Cleveland (Ohio) I got a lot of my inspiration from noise labels like Pizza Night and Wagon, and being around that crew—though I didn’t attend my first noise gig until 2010 and caught (what seemed to be) the tail-end of an era. You naturally dig into all that stuff though, at some point. You follow what resonates. I also remember really appreciating what was being done—people that would book gigs, gift you tapes/records they’re putting out, or they invite you to play a gig. That support meant a lot, and that chance to express myself meant a lot. That kind of always stuck with me, and I want that for more people. 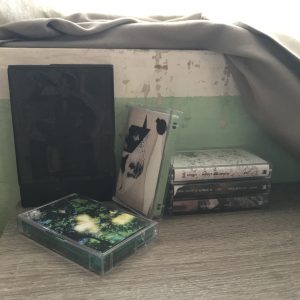 So far, nearly three dozen tapes have been put out by the label, is there a favorite or “turning point” tape where things finally seemed to fall into place?

MS: I don’t really feel like there has been a ‘turning point’ personally, as we have simply double-down on what we have been doing more or less, getting into a routine of things interms of knowing what we need to do locally for each run. We planned to release our first vinyl LP this year, but of course, the pandemic threw a wrench in that, hence why we released Network Glass’s ‘tired / stupid’ digitally for now to support Door, which has been successful—thanks to all who have supported so far. More to come.

JD:  Yeah I think things have just fallen into place over time, versus a certain moment. I will say linking up with DJ Olive through the ‘Listening To Fir’ tape in 2018 was a special crew/friendship connection. I’ll never forget the night I first listened to the demo (after hitting him up). That release led to other stuff with Gregor, some of which we’re still working on now, that should be ready to share soon. We’re also releasing our first vinyl LP this year, for our friend Door. His project is called Network Glass. I didn’t gush about the record on Bandcamp but we are very, very stoked to put it out and I think it’s his best work. Digital came out on April 17th, and We’re still determining when we’ll be able to drop the vinyl. It’s a chaotic one for sure. I think it communicates something though, even if arbitrarily. Maybe just close your eyes, pretend you’re in a video installation room.

What drew the label to the Steelworkers’ Drone project? I’ve heard nothing like this all year.

JD: It’s really incredible. We love it. Sara and Norman are friends of ours and we had planned the year prior to release that material. They’re both legends and we’re honored that they would entrust us with their work. Michael has a cool story about connecting with Norman, I think he just found him on Soundcloud one day.

MS: I became friends with both Norman Long and Sara Zalek back in 2018—two of my favorite Chicago artists working in a variety of mediums including sound; it honestly feels like we have known each other for much longer. Originally I approached Norman for a tape, which would become his first with us entitled “Electroacoustic Dubcology,” a special long-form c110 cs. I met Sara through some amazing soundwalk/deep listening sessions she and Norman were involved with organizing and/or performing/participating in here, and have played shows with both of them as well. So it was really just a natural trajectory that I wanted a tape paying homage to their collaborative works, which would become Steelworkers’ Drone—that release had been in the works for some time, maybe even the last year plus.

For tape art, who is doing the design work, and is it also focused on Chicago visuals? Which have been your favorite designs?

MS: For all release art, we leave it up to the artists to decide completely. So most releases are what the artists chose to use. Sometimes we will do a design in-house if an artist does not have a particular preference. Our dear friend Miguel Gaydosh aka 3000000000am designed our main logo and other design templates in 2018, which we will continue to use. I don’t really have a favorite, I am mainly just happy that artists we work with have full say in our process of working with them.

JD: Design templates and logo for the label were created by our friend Miguel in NYC (IG @3000000000am). Check out his website too, it’s sick. Favorite designs… that’s a tough one. I really dig the Sterile Garden j-card. Jacob does a lot of his own visual art, back at the Viceroy I’d get random collections of 8×11 drawings and scans in the mail. That was really nice. Life becomes more virtual by the day…

Also, do you all have favorite tape labels?

A rat is going to jump into your mouth and there is no way you can stop it: head or butt?—We used to ask this to the bands that came through our studio 🙁

MS: Amazing—butt first for me ;p