As a part of the newly instated Throwback Thursday series, Archives Coordinator Lekha Sapers will be blogging about KCSB’s collection of audio archives. For the remainder of the school year, you’ll get a chance to explore our 60th Anniversary audio collection, highlighting the stories of some of our most formidable alumni.

Directly following the North Hall Takeover, as documented in my previous blog post, the Black Student Union’s (BSU) demands were left largely unfulfilled. So three months of placidity + passive activism ensued from the students of color before further protest ensued. By January 10th, 1969, a United Front against the administration had materialized. Consisting of the BSU, United Mexican American Students (UMAS), and Students for a Democratic Society (SDS), they fought together on various fronts to eradicate racial injustices on campus. The former group’s interests lay largely in the racially charged police harassment that had been omnipresent on campus, and the latter two had petitioned the administration and white radical students to take interest in minority needs. The administration eventually met the Front amidst a panel of students, wherein they presented their various demands for a more equitable UCSB. Little progress was made, so the public meeting was soon followed by a private conference, consisting intimately of the Front and Chancellor Cheadel himself. 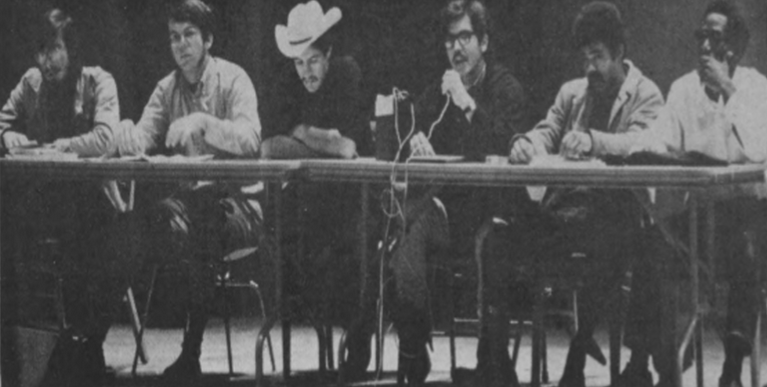 The audio attached highlights an interview with white representatives from Associated Students (AS). While much of the discussion holds racist undertones & archaic language, it seemed that AS, at the time, was making an effort to adhere to minority student demands. Most notably, AS cites a diversification of the board to represent all student interests, but the interviewer re-categorizes their single Black representative as a ‘token’. The black student had likely been utilized as a placeholder to quell the fire presented by the remainder of the minority student body – but of course, those peripheral efforts to do so were not enough. The Front’s primary rhetoric regarded the objection to the racist cultural milieu presented both by the university and society itself. And AS, in an effort to combat this, cited both increased minority representation as well as a change in curriculum to represent the histories of UCSB’s rapidly changing demographic.

The interview introduces a discourse surrounding UCSB students of color in the early 1970s. Listen in via the attachment above.

Posted in Blog, From the archives