KCSB’s music department is sitting down each month to write to you about one album added to our music library that left a strong enough impression on them to be crowned Add of the Month. This month, Internal Music Director Yousef Srour goes in depth on clipping.’s latest album, “Visions of Bodies Being Burned,” released on Sub Pop Records. 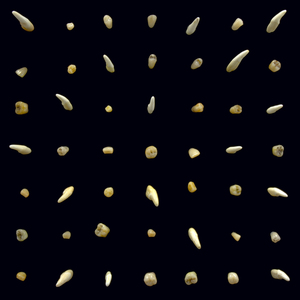 When you’re making a sequel to a horror movie, the rules are simple: more blood, more gore, and more elaborate scenes of decapitation and torture. Whether it’s Paranormal Activity 2, Jaws: The Revenge, or Sinister II, the sequels still never seem to live up to the expectations brought upon by the first film. That’s where Clipping comes in. Composed of multi-faceted rapper Daveed Diggs, as well as producers Jonathan Snipes and William Hutson, the trio came together in 2010 as a side project. At the time, Hutson and Snipes were merely remixing a cappella tracks of mainstream rap songs, concocting gritty, power electronics to lay the vocals over. Diggs, originally a part of the Oakland hip-hop collective The Getback, visited Hutson (a friend from grade school) before one of their shows and was asked to craft lyrics to one of their cacophonous beats–and just like that, Clipping was born.

Amongst the likes of Brotha Lynch Hung and Three 6 Mafia, Clipping is the horrorcore rap group from Hell. Even though their aforementioned predecessors laid the foundations for the genre, rapping about slitting throats and ravaging bodies with chainsaws, their beats were never too dark; they remained hip-hop-oriented, with boom-bap bass drums kicks and the omnipresent clicks of hi-hats. Clipping redefined the paradigm of horrorcore music with their production value–shifting the instrumentals of the genre from being light and ironically soft to being mind numbingly dark and abrasive. Clipping’s music, at its core, is experimental hip-hop: they pull influence from artists such as Björk and Death Grips, etching their sound with the crunch and squeals of noise music, the glitches and klinks of industrial music, the bellowing bass drums and paranoid hi-hats of trap music, all the while being complemented by creaks, the hum of motors, and ethereal soundscapes to complete the horror movie aesthetic of a Clipping project.

When it’s all said-and-done, what truly makes or breaks a horror movie is the script; without believable actors, and even more so without believable writing, a film can go from spine-chilling to laughable in seconds. Because of this, Clipping’s secret weapon is Daveed Diggs. Popularized by his work in the Broadway smash-hit Hamilton, Diggs has proven himself to be an encapsulating storyteller, winning a Tony Award for Best Featured Actor in a Musical in 2016 for his performance as Thomas Jefferson & Marquis de Lafayette. His precise flow and perplexingly-complex rhyme schemes allow him to tell larger-than-life stories as a hedonistic serial killer with an insatiable thirst for blood. Industrial-rap beats are his canvas and his voice is his brush, releasing sprawls of fast-paced, fully-enunciated imagery, painting intricate pictures of blood splattered walls and depicting the expressions on his victims’ faces before they’re dismembered and left for dead.

Visions of Bodies Being Burned is the long-awaited sequel to There Existed an Addiction to Blood, Clipping’s third full-length album, which pulled heavily from cult-classic horror movies from the 70’s and 80’s. This new album was recorded at the same time as its predecessor, but Clipping wanted to release 2 full-length albums months apart from each other–however a string of cancelled tours fueled the trio to delay the album until the Halloween season of the next year. The album itself tells a tale of a grisly killer on the loose, scouring the streets for innocent teenage girls (á la 96’ Neve Campbell), racist police officers, and any innocent civilian in his path.

The album picks up right where There Existed an Addiction to Blood left off. Bass drums thud in the midst of a quiet field, crickets are chirping, shed doors are creaking, and Daveed Diggs begins muttering a manifesto that makes one thing very clear: lo & behold, Clipping has returned.

The connection is cut, white noise floods your speakers, and a sinister voice enters upon the start of “Say The Name.” The chorus is simple: “Candlesticks in the dark/Visions of bodies being burned,” and it’s accompanied with detailed accounts of devil babies, cheap lobotomies, and bodies that have been “swiss cheesed” with bullet holes. Clipping wastes no time with build ups, we know the characters already and that’s what the “Intro” was for; Diggs is fiending for the taste of blood, and frankly, the first victims were never meant to survive. It isn’t until “‘96 Neve Campbell” that Diggs finally meets formidable opponents. Cam & China, twins hailing from Inglewood with a rapping style that would make Gangsta Boo proud, demolish the beat, and for lack of better words, “whoop Clipping’s ass.” The female rap-duo faces the killer, illustrated with the sound of a knife being unsheathed towards Diggs, forcing the antagonist out of their home after he arrives, only announcing his presence through a Oujia board.

“Something Underneath” is a foreboding account of Clipping quickly devising a plan to capture and kill his next victim. The track is composed of synchronous, layered rapping by Diggs, all over a minimalistic, glitchy beat, preparing you for the next song. “Make them Dead” is formed around a shrill, high-frequency pitch that extricates chills from your body, sounding like an amplified, screeching version of an analog tape; in the backdrop, you can hear the doctor as they’re performing sutures, preparing the killer for his next ambush. The anticipation builds on “She Bad,” as the woods are calling for the victim to come back. Three piano keys repeatedly descend, the ticking in the background gets faster and faster, the bass drum reverberates, and death comes shortly after on “Pain Everyday.” Victims are screaming, the album is transitioning to its climax with squeals, fear of “snitch behavior,” and the horror film is slowly morphing into more than just aimless murder and mutilation; it’s becoming a tale of retribution.

The album showcases Clipping’s ability to be more than just a horrorcore/industrial group; they incorporate elements of other niche hip-hop genres as well, from nimble hardcore hip-hop to muddy glitch hop, on “Check the Lock” and “Looking Like Meat,” respectively. “Check the Lock” is the most contemporary song on the album, referencing glistening VVS chains and carrying semi automatics, a nod at new-age, mainstream rap artists, highlighting the paranoia that seeps into their day-to-day lives. On the latter track, “Looking Like Meat,” the underlying instrumental is grimey and the bass is wobbly & overbearing, making your entire body shutter as Ho99o9 and Daveed Diggs scream cannibalistic lyrics meant to make your blood curdle.

The project’s zenith stretches over a span of 3 songs: “Drove,” “Eaten Alive,” and “Body for the Pile.” “Drove” is an ambient interlude taken from field recordings, as well as Snipes & Hutson’s gruesome imaginations. We enter a shed, there are cows mooing from afar, and we can hear something trembling. This leads us into “Eaten Alive,” where the setting of the killing spree is finally revealed. Diggs has led us to a shed at a swamp in the middle of nowhere; there are spirits and haunting entities that fill the silence; our vision is cloudy. The track’s outro is surprisingly devoid of lyrics, letting our imaginations run loose, putting together the pieces as we hear the clamoring of tools in the shed, bodies fidgeting, and the slow withdrawal of life from soon-to-be-corpses that are slowly losing an insurmountable amount of blood. “Body for the Pile” is the moment we’ve been (delightfully) waiting for. Diggs is manic and we can feel his grim smile from behind the microphone; this is the moment he’s been waiting for as well. Blood seeps into the carpet, the deep red is being illuminated by the moonlight, yet we’re too entranced to notice because of Diggs’ vivid lyrics about spiders crawling and blood dripping, the sound of drills buzzing in the background, and the demonic repetition of the phrase, “You’re just a body for the pile.” Bodies are being burned; police sirens are blaring; you’re left with only one question–where is Clipping?

“Enlacing,” arguably the group’s best track to date, is a hazy introspection into the mind of Clipping, a killer that can only do evil. The song is an existential, cloud-rap piece on suffering–what it means to lose everything and how meaningless life can be, told from the perspective of a hedonist who is beginning to question whether or not he even finds pleasure in executing his victims anymore. Diggs once found solace in pain and punishment, but what should he do when that no longer satisfies him?

The last track, “Secret Piece,” is a conclusive Yoko Ono composition from a 1953 text score that allowed its players to choose a note & it would play along with the sound of “the woods from 5am to 8am in summer.” The opus transports the listener to a land of hums, with birds chirping in the open air and ominous violins subtly playing louder and louder, crescendoing just one last time to remind us that, yes, Clipping will be back for more.