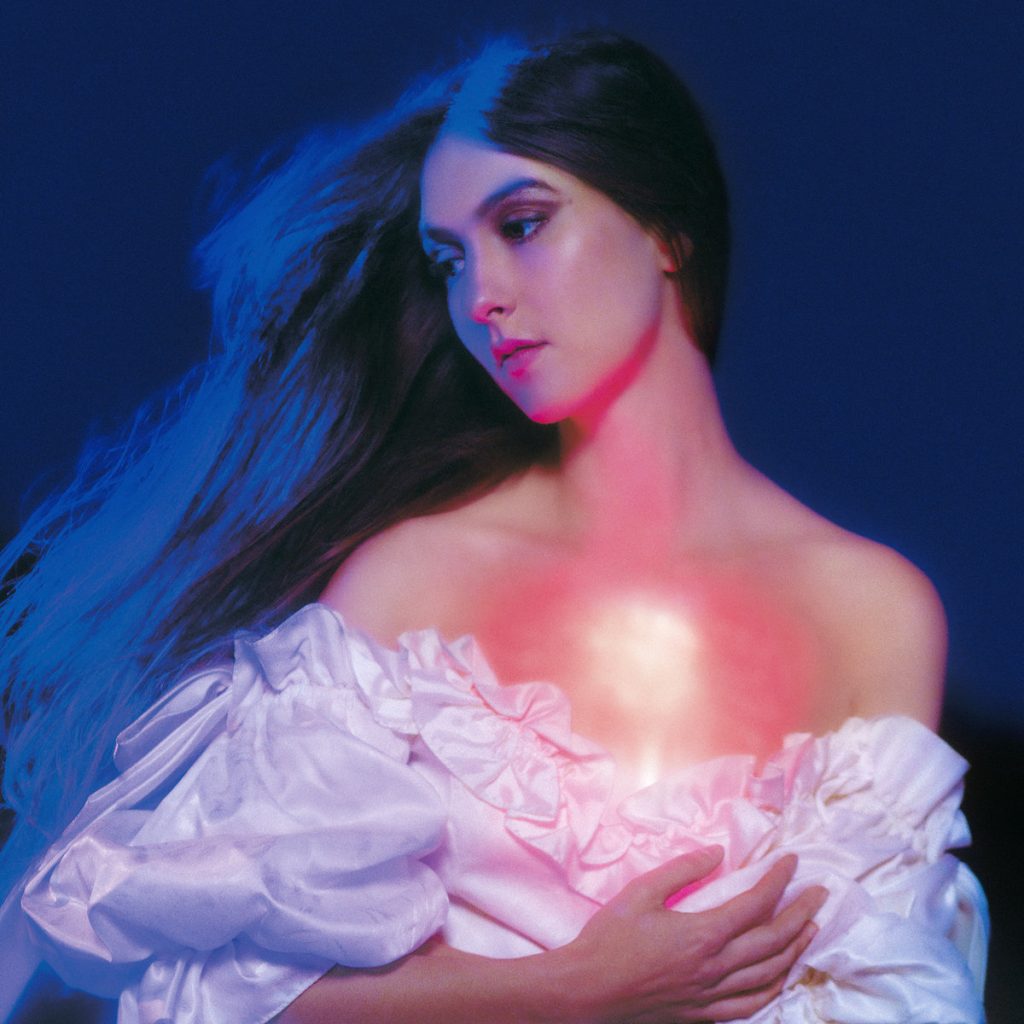 When I was 15 and in high school, I spent many lunch hours in the library, nervously poring over the lyrics of Father John Misty’s third album Pure Comedy. The omniscient narrator in this story places the human race on the operating table, opens us up, examines our inner mechanics, and diagnoses our ultimate demise. This album inspired a relentless uneasiness within me; it sounded like a prophetic warning that the clock was running out on the world I had always known. This prophecy would be fulfilled in 2020 by the two years of collective hell brought on by COVID-19 pandemic. Late into 2022, I re-listened to Pure Comedy and realized that it has lost some of its power over me. I could not understand why until I heard Weyes Blood’s newest album And In The Darkness, Hearts Aglow.

Natalie Mering’s pseudonym Weyes Blood has stuck with her in slight variations as she traversed the territory of several musical genres throughout her career. Mering picked up her musical interest from a family of creatives: her father was a musician in a new wave band in the 1970s and her siblings were musically inclined. However, her family was very religious, and though she did not subscribe to their religious views, one can hear a clear influence of this religious upbringing in her lyrics and in the instrumental, chamber pop-esque, choices present in her music. Since dropping out of Lewis and Clark College, which she attended for a year and hosted her own radio show, Mering played in several noise-rock and experimental bands such as Satanized and Jackie-O Motherfucker. Yet it seems that she struck gold and really found her style in the last two solo projects she has released- Titanic Rising and And In The Darkness, Hearts Aglow.

This first track begins with a steady piano rhythm and gentle string instruments which sedate the listener into a hypnotic state, making them comfortable and setting the vocals at the center stage. Just from the title of the album’s first track, “It’s Not Just Me, It’s Everybody”, one can get an idea of the themes that will be explored in this album and the way in which Mering will dissect them. She observes herself and utilizes these personal observations to derive universal truths about the human condition. Why does she do this? Because “it’s never just me, it’s everybody”. This approach might have resulted from one of the lessons that the pandemic has left us with, the idea that complete independence is a myth. Human beings are a social species- we depend on each other and are affected by each other, much more than some people would have us believe.

With a simple line about loneliness and social awkwardness, Mering highlights universal and essential human truths. Many songwriters- like Bob Dylan, Joni Mitchell, and even Father John Misty- have succeeded at shining a light on such truths. Yet, what makes Natalie Mering’s approach to these paradigmatic issues of the human condition so unique and effective is that she chooses to tackle them with optimism, sensibility, and empathy instead of apathy, cynicism, and judgment. Essentially, we are all in this together, and as such, we should treat each other with empathy and understanding instead of drawing arbitrary lines in the sand to create imaginary divisions. Instead of flying above the rest of us like an eagle preying on weaknesses, Mering has made the radical and all too rare choice to come back down to earth. In doing so, she places her hope in the endless possibilities that can derive from human love and connection.

This sense of empathy is further developed in the second track, and my personal favorite, “Children of the Empire”. This track features a more upbeat piano rhythm, which evolves into a more complex instrumental arrangement with acoustic guitars, strings, and, of course, Mering’s voice at the forefront singing an occasional, perfectly placed blue-note. In the lyrics, Mering acknowledges the catastrophic results of our massive fumbling of matters relating to the well-being of our planet and society. Yet, as is reflected by the instrumentation of this track, Mering is optimistic about the future in her lyrics. Additionally, the fact that she refers to the human race as “children of the empire” paints a picture of a naive populace, under the control of ominous totalitarian forces. By using this language, Mering urges us to treat each other with the sort of empathy and understanding that one would have for a child who has made a mistake.

The second and third tracks shift focus from grander societal issues to interpersonal, relationship-based issues. The instrumentation of “Grapevine” is a big shift from the first two tracks as well. This song is folkier, which Mering leans into with the addition of bells and lyrics about cowboys, ghost towns, and James Dean. In “God Turn Me Into A Flower”, Mering showcases the full range of her voice while singing about identity and mental struggles. Mering allows herself to be vulnerable for her audience, exposing her flaws and fears and creating perhaps the most personal moment in the album. In “God Turn Me Into a Flower” there is also a sense of surrendering to a higher power, which might have to do with Mering’s religious upbringing. Whether that be a reference to the Christian picture of an all-powerful God or of a ubiquitous guiding force found within the fabric of the universe is naturally up for debate.

The next trio of songs is most definitely the climax of the album. “Hearts Aglow” is a song about youthful, naive, love, the kind of love that’s marked by good intentions and riddled with unintentional mistakes. Mering employs imagery of a fair, a ferris wheel, and even cotton candy to invoke this picture of a return to childhood and innocence through love. Additionally, the image of the ferris wheel indicates the kind of analysis Mering is making: one can get a bird’s eye view of the world below from a ferris wheel, yet the act of riding a ferris wheel is a deeply human and innocent action. In the chorus of this song, Mering also seamlessly transitions the subject of the song from herself to the human race as a whole, indicating that the two are interchangeable.

The next song, “Twin Flame”, once again focuses more on personal relationships. It is a song about self-sabotage in relationships which is caused by unresolved personal issues, pain which causes one to create a disguise to protect themselves from getting hurt. It is also a song about how finding the right person can make one feel whole, which also means that when that person leaves, one is left to feel like a fragment of themselves. The climax of the song is followed by a synth-laden reprise, which contains no lyrics but a collection of vocal harmonies and spacey synth sounds. The second to last song, “The Worst Is Done”, poignantly describes the feelings that most people experienced during lockdown of isolation and desolation. The instrumentals and the title of this song, however, are bright and optimistic. Mering acknowledges that after experiencing something as painful and nightmarish as the pandemic was, society will not be the same. However, it is possible to use the lessons we have learned to begin again, to pick up the pieces and build something better than before.

Mering ends the album with “A Given Thing”, an ode to the power of love. The very last lines of the album, “I can’t tell where you end and where I begin, it’s a given thing, love everlasting”, once again point the listener towards the moral Mering is attempting to transmit. In summary, love and empathy are our most powerful weapons against apathy and the evils found within our society. This very lesson is the reason why Pure Comedy lost its grip over me after the pandemic. Father John Misty’s prophetic warning of impending doom for our society was realized in 2020, and I do believe it still holds true. However, it is my belief that the apathy Joshua Tillman employs to attack the problems of our society is utterly counter-productive. It is an attitude that only serves to create more divisions, instead of finding common ground. In contrast, Mering pinpoints the true essence of humanity- love & empathy- and encourages earnest reflection which has true potential to transform into a sense of understanding.

Posted in Blog, Music reviews, Music, Add of the month