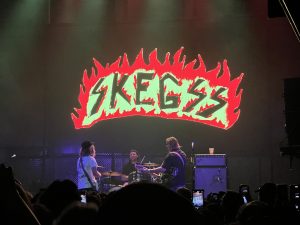 The crowd roared. The Aussie group needed no introduction as the crowd rippled with mosh pits opening up. The crowd bristled with excitement as their favorite band finally came to their home after two years of being unable to tour due to COVID.

The magic of Skegss could easily be their music, but the audience is even more infatuating. Their energy is ecstatic, fun and carefree. It’s been years without mosh pits, months since the tragic Astroworld Music Festival where concertgoers have become afraid to let loose. It’s a Skegss concert in San Diego — a beach town with the lingering aroma of cigarettes and weed and the grease from skateboard wheels. The crowd was laidback, waiting for the perfect moment to just jam out in total indie, surf rock fashion. it might be the closest Gen Z has gotten to fragmented punk imagery. No angst, just the alleged good vibes. When I lost my hat and glasses in the mosh pit within seconds of “Valhalla,” there was still more than enough space to look towards my discolored, now-stepped-on sneakers and scour the beer drenched floor. A light-hearted concertgoer reached over to hand me my hat, happy to help in my frantic search. That’s the Skegss crowd. No boisterous kids off of one-too-many Red Bulls, no one particularly out of place, just a crowd full of respectful late-teens and 20-somethings searching for serenity by crowd surfing a room full of strangers. They love skating, they love 805 beer, but most of all, they love Skegss’ free-spiritedness.

Their sold out show in San Diego was a mixture of hits and cult classics, but again, the music barely mattered. Every song blended together as if the band tried to curate a DJ set. The energy didn’t waver once as the drummer, Jonny Lani, dripped with sweat to make sure that the rhythm of the jumps were on time. Bassist, Tony Cregan, and lead vocalist/lead guitarist, Ben Reed, hardly introduced themselves as they walked on to their own performance of “Escape (The Pina Colada Song).” The ambience was that of Byron Bay, New South Wales, Australia. They’re no strangers to the beach, and they are definitely no strangers to adolescent shenanigans. 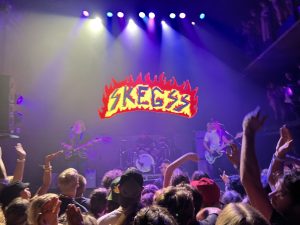 Fan favorites were “New York, California,” “Up in the Clouds,” and of course the glorious, “Spring Has Sprung.” It’s a beautiful, sun-drenched day in San Diego on April 22, 2022. For these young adults, spring goes on forever. Acid tabs create a vibrance in the flora and fauna that lets the flowers glow to a neon green. Look at their album art, self-made by a band that holds their own art exhibitions. Just like the music, their art is brazen and wonky, molded on the edge of mind-expanding substances. They’re colorful, illustrious, and wholly the essence of the band. Their live renditions were immensely more upbeat, or perhaps the audio-visual experience of seeing the crowd jump up and down to the uptempo indie rock outfit made it seem so. The crowd loved it, the band reciprocated the energy, and everyone was perfectly elated to just be there. 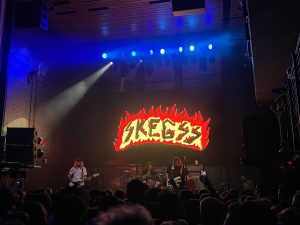 The entire experience is best summed up by the car ride that followed the concert. It’s 3am, the streets and highways of San Diego were arid minus a select few clubs that close on the verge of twilight. Nonchalantly, unscathed by the migraines of adulthood, my friends and I turned up the speakers of the sedan, rolled down the windows and screamed the lyrics to “Stranger Days” as if our lives depended on it. The moonlight shined, but our mind and voices were elsewhere – “May your dreams never die!” None of us can really sing, none of us can really harmonize, but for one brief second we all emulated Skegss’ “DIEEEEEEEIEEEEEEIEEEEEEEE” as if it’s the antecedent of memory. For now, it lives in our memory as the precipice of youth as we’re all off chasing our dreams with a newfound hope.